A few of us decided it might be nice to trot off to Cape Point for a run.  Those folks wanting to do some extra running outside of the normal organised runs should please let me know when next we meet then I can add you to the SMS list for future spontaneous outings.


We started our run from the car park and Olifantsbos.  We chose to run the shipwreck and Sirkelsvlei routes as one giving us about 10.5km. 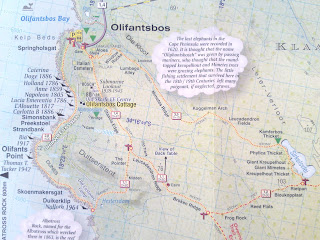 © Peter Slingsby http://www.slingsbymaps.com/
The route was mostly runnable with the first few kms in soft sand. Tough but well worth it, the wrecks were a sight to see.  I left my camera behind but Gaeleen had her cell with her and she captured these stunning pics of the Thomas T Tucker.  THomas T Tucker was an American liberty ship who ran aground of Olifantsbos point in November 1942.  She was on her maiden voyage.  She was carrying war supplies at the time. 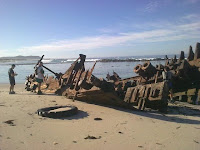 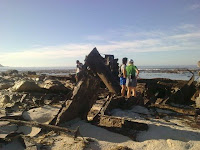 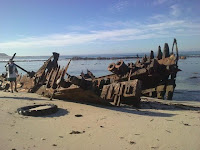 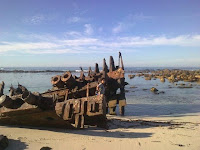 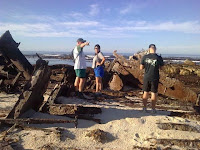 Sirkelsvlei is just stunning.  What a surprise to find ourselves in the company of ostriches, bontebok, terrapin's and tortoises. There seemed to be some sort of black lizard seminar on the go, every rock sporting one or two sitting in the sun. 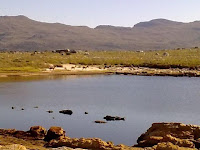 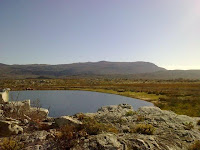 As the old saying goes "what goes around, comes around".  This weeks Jungle Joe award goes to yours truly for a spectacular swan dive into the brush.  Nothing too spectacular (or so I am told), I did find yet another use for a buff as Liz stretched and knotted mine into a very effective ankle support.  Luckily it was only a few km's from the finish. 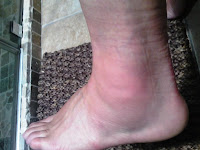 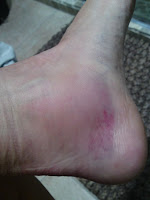 Posted by Sandra Ackland No comments:


A different route was agreed and we set off.  A quick trot up the river walk,
along Steenburg ridge, right up to the look out and back down again.
A familiar but still fun route.  The planned breakfast at the dam ended up being breakfast in the car park - thanks to the cycle race.  Tim popped in to say high which was great, we don't often get to talk to the man behind the mails and VOB trail running. 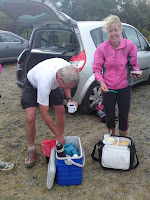 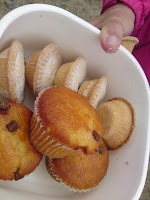 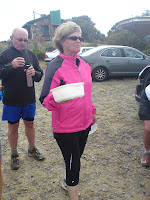 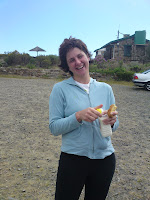 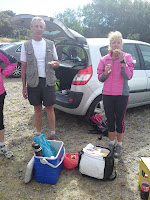 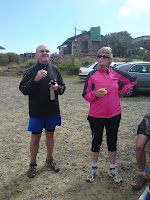 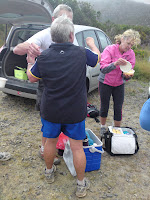 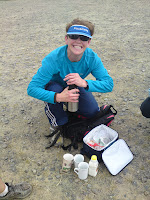 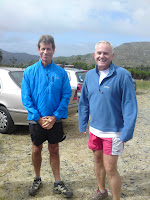 This week’s Jungle Joe goes to Neil for his spectacular face plant on the decent.  I missed the action but did manage to capture some battle scars. 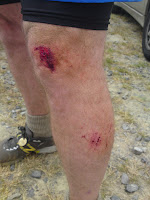 Fay's brisk walking group seems to be joining most days now, so those of you still having concerns about being too slow (or unfit) should take advantage of the opportunity and join the group.  You will find your pace somewhere between Greg in the front and Fay at the back.
Peter started this group with the hope of providing those starting out (or
ending off) in trail running a social group with no pressure (just support) and
the promise of a pace slower than Tim's VOB group.  The plan being that
once firmly in the clasps of the trail running bug, those getting fitter (and
faster) would move up to Tim's group.  Well, I think he has achieved just
that.
On behalf of all those taking part in runs this year I would like to say a big thank you to Peter for all his efforts in getting (and keeping) the group going.
Until next year, happy holidays.
Sandy
Posted by Sandra Ackland No comments: