24 found their way to the start on Boyes Drive and after the usual preliminaries Julian lead the group up the steps towards the start of the long climb up Farmer Peck's Valley.   From all accounts this is a good and scenic route which we can add to our growing list. 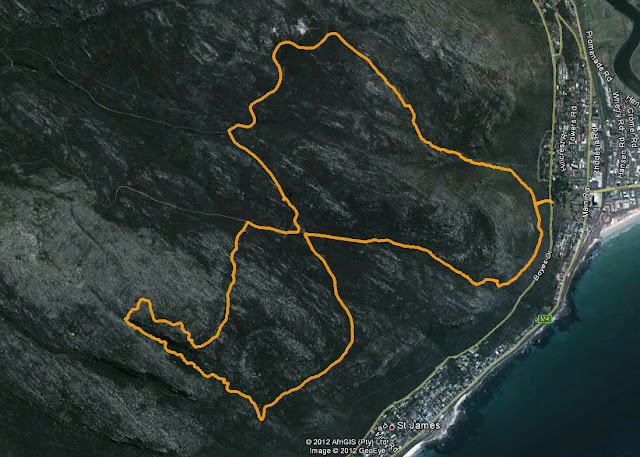 Despite many of our group being flooded out in Knysna and others enjoying the Bastille day festivities in Franschhoek 15 turned up for our sortie on a  crisp, clear and cold winter's morning.  The chilly south easterly wind saw us take off on time and the three latecomers had to hare after us and almost missed a crucial turn.

Julian led the main group with Gae as sweep whilst I followed Fay in her recovery group.  We had a glorious time despite the wind and a little rain but after about an hour or so we were somewhat surprised to hear familiar voices.  Never the less we could not actually see anyone but  for a small group of hikers some way away so assumed we were mistaken and kept on.
By means of  my  meticulous planning I had intended that our recovery group should reach the cars about 15 minutes before the main group.  So imagine our surprise to find the parking area almost empty but for Gae and Julian snoozing in their car!   Not really sure what happened,mutters about missed the second path etc etc so they  ended up doing a shorter route than that planned.  Seems we did hear then as they passed ahead of us through the thick bush.

Thanks to Mike for the photo. 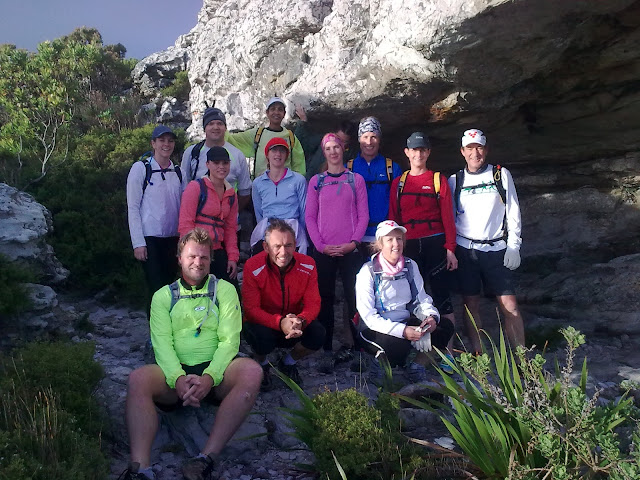 The heavy cloud covering the mountain necessitated the cancellation of the planned run up to the Saddle between Devil's Peak and Table Mountain and down Newlands Ravine as well as the Plan B [Bad Weather] route along the travese.     So a third alternative along Tafelberg Rd was proposed and eagerly taken up by 10 stalwarts.

Dave Bywater with assistance from Tissa, led this group and reports:

I write this with mixed emotions……on the one hand, I’m sad and confused, having met some wonderful people who awoke in the early hours of Saturday morning, drove all the way through to Tafelberg Road, stood outside in the pouring rain, then decided to get back into their cars and return home? On the other hand, I’m so happy that some of us actually ventured out to do what had been planned for us. Well, not actually exactly what had been planned, as Platteklip looked a trifle slippery. So, having said our goodbyes to the “faders”, 10 of us hotfooted it along Tafelberg Road to the bench at the end. And then there were 9!!! Paul and Dave retraced their steps for about 500 metres in search of Randolf, but to no avail. Back to the group and a sensible  discussion ended with us agreeing that Randolf had probably turned back as he a) hadn’t passed us and b) is too experienced to get lost on Tafelberg Road.


I mentioned  the “9”
*Paul……Camera supplier, 7hr40min Comrades, sub 60min 15km……what on earth is he doing in this group? (more about Paul later)
Guy……Doberman (Vlakkenberg) owner, remember the cyclist on the road to the mast?
*Jean-Pierre……Belgian chocolatier, landed in Cape Town Friday, on the mountain on Saturday
Michiel  Faber; Quiet man, deep thinker, middle of the pack kind of guy, checking things out and taking things in
Tissa Fuchstoch First-time compression socks wearer, her non-stop chatter frightened the life out of the “newbies”
Allison Lamb  [Minus Greg]  paying a courtesy visit from the Longer Faster group who informed all who cared to listen that her legs hate uphills
*Gina……mentioned that she has 3 children, Eleven, Seven and Four……which we all felt are rather strange names for boys, or girls for that matter
*Melony……all the way from the West Coast, first time ever running on the mountain
* All Newbies
Dave Bywater  chooser of the route (in consultation with the others), leader for a while, sweep for the remainder

The rain had by now abated, so it was back to the bench and on to the jeep track and single track like gorillas in the mist. On and on to the turnstile, then up to the blockhouse for a regroup and the first set of photographs. We decided that we would drop down into Deer Park and take in some of the TMC, VWS and Celtics Trail routes, before the lung busting, quad busting, sprint up to Dead Man’s Tree. All rather tranquil, until the serenity of the morning was shattered by Guy doing a magnificent impression of a combined arabesque/pirouette and smashing his knee against a jagged rock, the blood initially oozing, the gushing out of his leg. Should thought ever be given to awarding such an injury, as is done by (Sir) Tim’s group, then there can be only one winner……the pictures tell the story.


Special thanks go to Paul for the use of his camera, and for jogging back to meet the group every now and again, after he’d hared off into the distance. On the subject of Paul, he lives in Tamboers Kloof, so ran 5km to the start, did the “sortie”, then went off to the top of Lions Head before winging it back home on foot. You reckon he’ll be back to join this group again?......I doubt it!!!  More like a candidate for Sir Tim's  Longer Faster group.