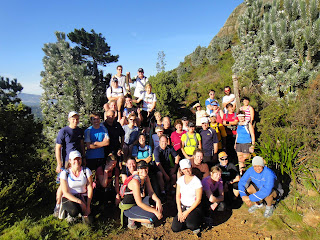 Gaeleen's report-back on last Saturday's sortie: It was definitely a ‘team’ effort this morning.  Veronica was able to instruct Darryl where to lead the group, I stayed in the middle acting as co-ordinator and Neil and Sam were the sweeps.

We decided not to repeat our mistakes on the previous run in the area where we spit up into smaller ‘lost’ groups, and we regrouped often and kept it as a pack run rather than splitting into 2 groups.   After a lot of hill walking, we decided to carry on with the walking and take the steps up to below King’s blockhouse from the contour path.  From there it was the same as Leg 2 of The Table Mountain Challenge – a bit too soon after the race for some of us!  We turned down at Fernwood buttress – rather than tackling more steps, and made our way back to the cars. A lovely run of 11 km. 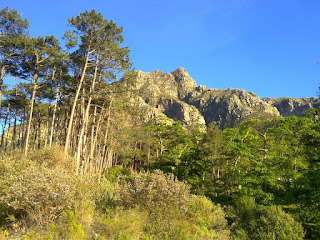 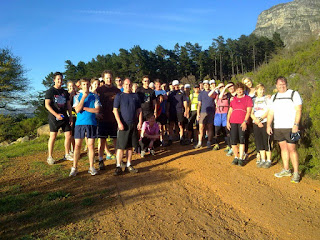 We had a big group of 34 altogether which included a number of newbies with us, so hope they will be back. 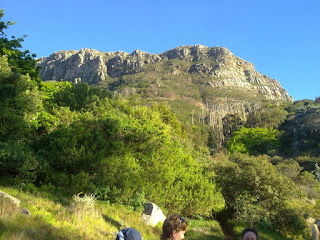 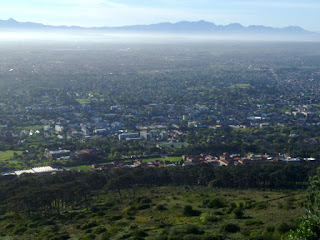 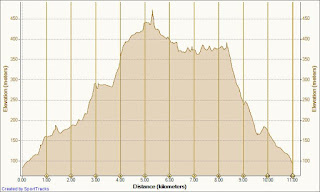 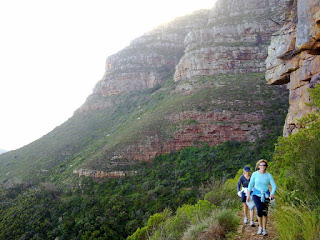 Given the damp, chilly start to the morning, it came as something of a surprise to see such a good turnout of 31 for the run along the pipe-track above Camps Bay to Corridor Ravine and back.
Although this is not a particularly challenging route in terms of gradient, the terrain certainly is: tree roots, loose rocks and stones, a flowing river and in places a barely submerged water pipe to negotiate as well as the slippery stone steps near the ravine. The fynbos is clearly thriving from the recent spattering of rain and once the clouds lifted, we were treated to a clear view of Lion’s Head and Camps Bay on the one side and the Twelve Apostles at our back. What a magnificent setting, and how fortunate we are to live in the Cape.
Congratulations to Alan Hammond on joining the Decurions by completing his tenth run with our group
Posted by Peter D Rogers No comments:

Schools rugby being over, we welcomed back Neil, Felicity and Trish, as well as Sandy who has been off trailing for two months with an ankle injury and Sam who had been lecturing overseas.
With 38 runners turning up at the RV, it seemed a good time to introduce a change that we have discussed in the past - namely splitting the group into a faster group and a slower group.   Darryl - one of our upcoming regulars - agreed to lead the express group and Roger took on the role of sweep.   Veronica, ably assisted by Jane, led the regular group, with myself  in my customary role of  sweep.
We set off from Tokai Arboretum on the long winding haul up to level 4.  On our way up, we exchanged banter with several groups of mountain bikers, one of whom admitted that running trails was actually more fun.  We eventually reached level 4, but contrary to its name,  it was far from level as it marked the start of the ascent up the side of Vlakkenberg Peak. In the meantime,  the express group had made a wrong turn and were on the road to nowhere!
After yet more uphill, we reached the lookout point overlooking the Klein Constantia vineyards where we met another trail group who had come up the zig zags.  They informed us that the missing group had turned back and were now making their way up behind us.  Eventually they found their way to the lookout and we all returned via the level 4 track which leads across the face of Constantiaberg and down the Elephant's Eye footpath.
Darryl was subsequently forgiven for his navigation error, given that getting lost and taking wrong turnings is all part of the allure of trail running.   The general consensus was that the splitting of the group was to the benefit of both the faster and slower runners.
Congratulations to Jane le Roux and Mike Hart who both completed their 10th sortie and have thereby joined the ranks of Decurions.
The regular group covered 12kms and the express group did an extra 2 due to their navigation error. 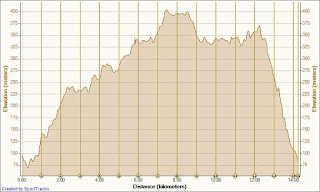 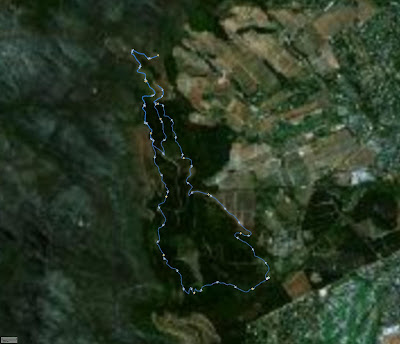