Perhaps it was the later start-time but we had 39 who pitched up-a record turn-out for our group. After the usual preliminaries Neil led us out for the run up to the plateau behind the dam and across to the Tokai lookout.   From her we followed the dirt track over to the lookout platform overlooking Hout Bay.
Then it was a long uphill slog but relieved by some good views of False Bay although by now the cloud was forming and the wind rising.
Then a case of encouraging tired legs to up and over for the long gliding run down to the Noordhoek Peak lookout but strangely no-one was particularily interested to climb to the top.
We returned to the dam via the trail sliding down the flank of the Silvermine Dam amphitheatre  taking time out to admire some flowers 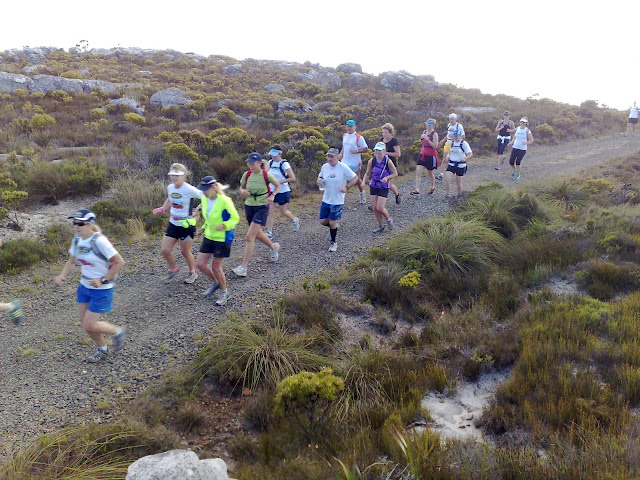 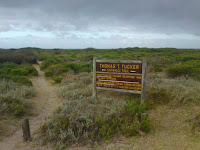 Cape Point-Olifantsbos -Sirkelvlei route
14 of us made it to the RV having passed a small herd of Bontebok grazing at the roadside with two baby buck. 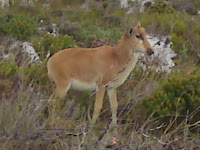 We set out to follow the shipwreck trail which hugs the coastline to the remains of the Thomas Tucker a WW2 freighter which ran agound trying to evade a German U-boat.  Although the loose sand on the beach made for heavy going we were fortunate in that we only had to face a mild breeze.    On the way we passed a  baby seal sheltering on the rocks, then a lonely stick cross marking the grave  of some unfortunate fisherman.  Soon thereafter we came to the wreck where we regrouped and took photographs.


We then turned inland and made our way up the coastal embankment to the plateau and through the fynbos towards Sirkelvlei.   The heavy overcast sky with ragged clouds driven by the rising sou-easterly wind with a spittering of rain, combined with running through the completely unspoilt terrain with absolutely no signs of human activity inculcated a deeply  primordial feeling.

At the vlei we heard plenty of bird sounds but  the strong wind ruled out flying except for the most hardy or those we startled. After a quick regroup we set off along the side of the vlei fortunately with the wind now behind us.  Leaving the vlei us we ran through more bush with many interesting rocky outcrops and mimetes.  In places the trail was soft sand making for hard going yet in others it was strewn with jagged rocks neccesitating careful footwork.


By the time we reached the rocky ridge overlooking the parking site the wind had risen to gale force and we had a good view over the wild seascape before descending down the trail back to the parking area.


A really enjoyable run of 10kms taking us just over 2 hours.