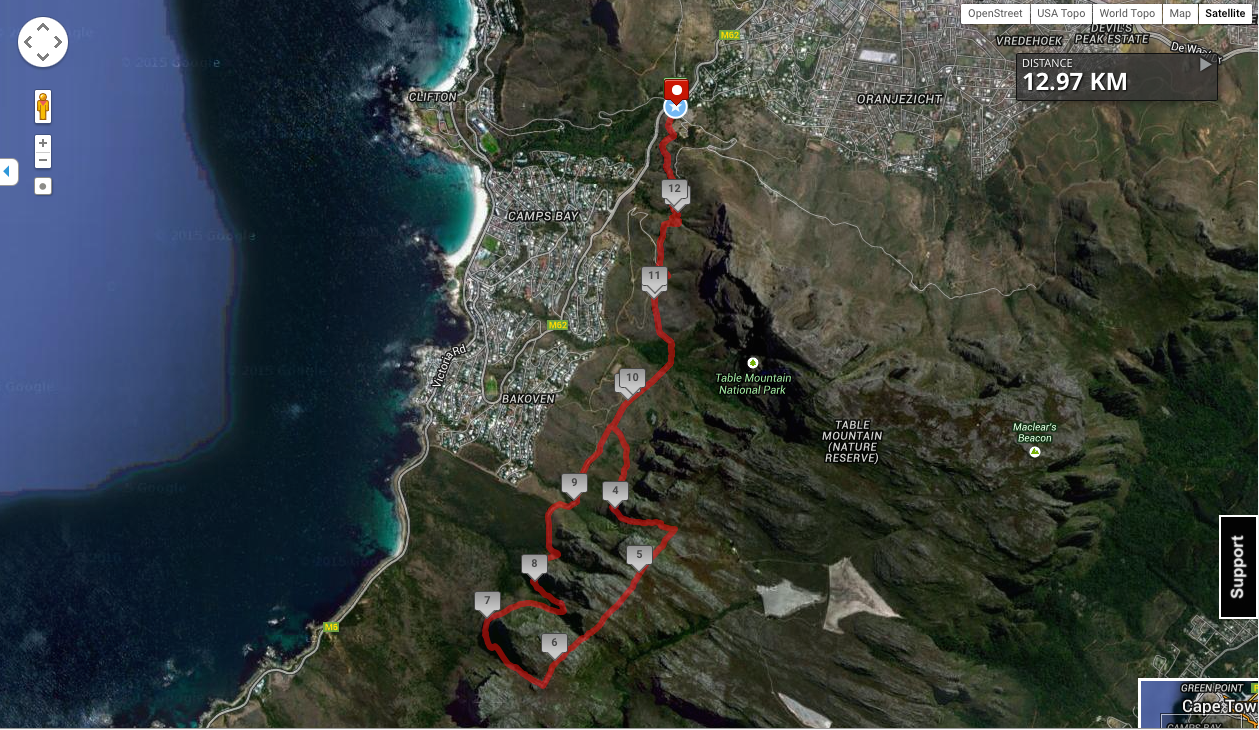 Those clever Norwegians were right again - we awoke to the sound of rain on Saturday morning. Despite the dawn downpour, 37 keen trailers presented themselves at the wooden gates to Rhodes Memorial for a recce of the Two Oceans 10km Trail. However, the kindly heavens smiled on us and by the time we set off, the rain had stopped and we were presented with perfectly fresh, cool forest paths to run on.

The route is a tricky one, with lots of twists and turns and zigzags, and Julian did his best to remember it from previous runs, resulting in an ‘artist’s impression’ of the route. The recovery group attempted to follow the route on Endomondo, but we still managed to take a wrong turn twice and had to backtrack. We also missed a loop at the beginning and tacked it on the end instead. It was a "creative" morning.

Adding to the creativity were two injuries in the main group: Dave and Theresa P. both twisted ankles, Theresa’s resulting in a torn ligament which will unfortunately keep her off her feet for a few weeks to come. The recovery group took it very easy and the biggest injury was Quintin’s twisted ankle, which got better magically at the offer of all of the ladies in the group kissing it better. (Or perhaps it was the look he got from his wife at that idea!)

Thanks to Julian, who heroically led the main group of 20, which was gracefully swept by Gaeleen. Thanks also to Nicole, who kept the 17-strong recovery team in tight formation. Not a single soul was lost this week from either group.
That we know of...
There are a couple of names not ticked off on the register: Belamie and Jeanne, are you still out there? :)

The main group did 10kms in 1h46 and the recovery group a slightly longer 10.6kms in 2 hours exactly.

PS: Perhaps I should add here for the benefit of anybody still confused about the official 10km route (Mama T. & Co.), that the official first kilometre is very different from our run because the exit from varsity is usually locked on non-race day. On The Big Day, you will start on the Jammie steps inside UCT and run along University Avenue/Rugby Road towards Muizenberg, turn right as you leave the UCT grounds, run back along the top road inside UCT (Ring Road?) and clamber out over the turnstile steps into the Rhodes Mem approach road, climb the hill a little further up and join the path as shown on the below image. Or something like that.  (See below: our run in blue, the official route in red.) 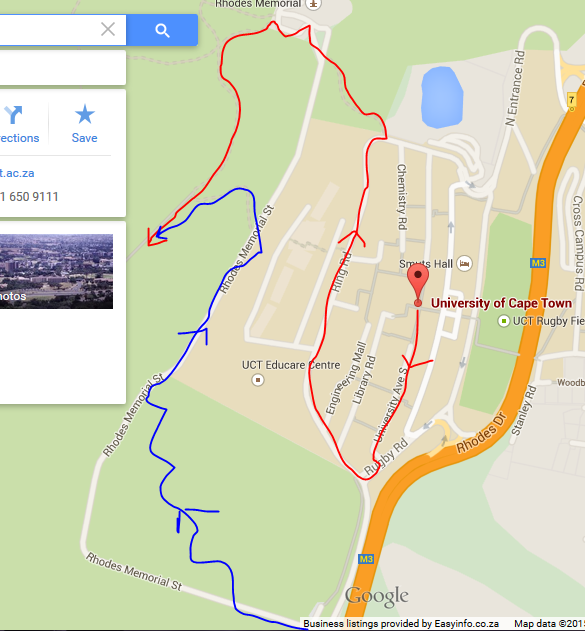 Many runners turned out for our first run since the devastating fires on the peninsula mountains. This week we did a circular route through the unaffected Cecelia Forest and Kirstenbosch area.


All groups started at the Cecelia Forest parking (corner Hohenort and Rhodes drive) and followed the cycle track, parallel to Rhodes drive, towards Southern Cross drive. From there, groups followed the steep jeep track towards Constantia Nek, before turning north along the upper contour path.  From there, runners went up the stairs to Rooikat ravine and towards the Cecelia waterfall.  The path was mainly undulating stairs along the side of the mountain, which gave great views of the valley below.  Runners carried on to the Fourways signpost above Kirstenbosch, where the Main group did an extra loop to Skeleton's Gorge and the Recovery group to Nursery Ravine.  All groups headed down the various contour paths and short cuts to the car park.

The Main group completed 12 km and the Recovery group 9 km in about 2 hrs.

Gregg Smith completed his 75th sortie so is now eligible for a Blue tee and Aneen Koch her 10th so now moves to the speed check-in on the register.