We had 26 people pitch for a really lekker run today, lots of newbies including a visitor from France – Loic.

There were 14 in the Main group led very ably by Hein at a surprisingly comfortable pace. Dougie (out of running retirement) kept the back-markers entertained with his story for every topic.

I always wax lyrical about this route because I love it so much. Every time I run it, it is different – from the wet winter runs with cascades of water coming off the mountain, the misty ones where you just see the cranes at sea peeking out and today when Spring has sprung and we ran through a forest of Keurboom trees in full purple bloom (Dougie says mauve). It’s a simple route: up the dreaded Kloof steps, along the ‘undulating’ contour path, UP to the Saddle and then down onto the Oppelskop path and back via the slightly lower contour path (where you will find the Keurbooms) until you join up again with the upper contour path and retrace your steps. There were no injuries or lost runners so a very successful sortie! 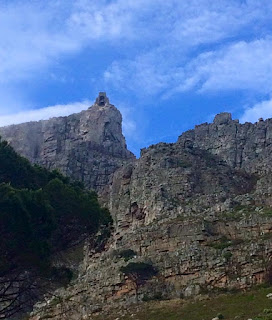 
"Despite the inclement weather the Recovery Group enjoyed a large turnout of some 17 people, many of whom were first time members. The group was led by me on a beautiful and brisk paced out and back of approximately 9 kms. Having navigated our way over a technical and rocky route, on the way back we made our descent at the lower cable station so that everyone could let their hair down and enjoy a bit of speed heading down the tar road to the car park and finish. 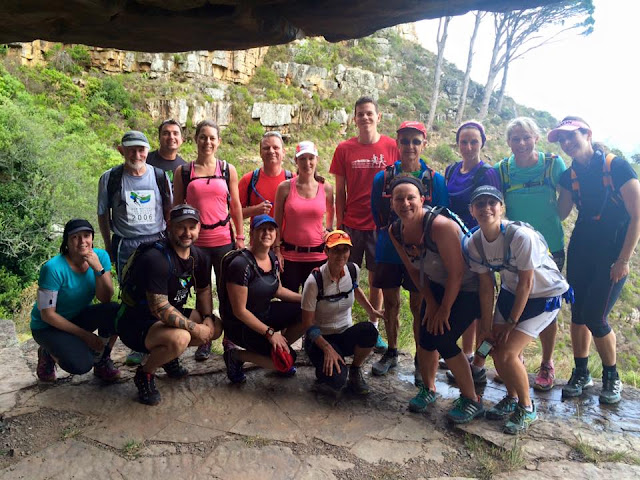 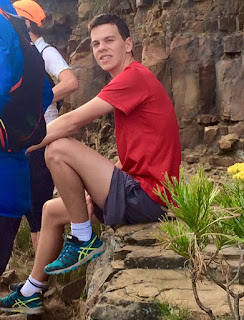 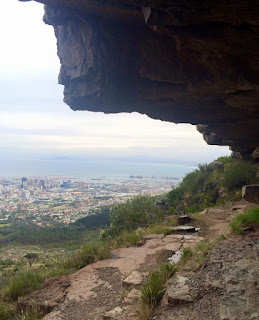 
29 turned up at in the parking area at the top of Black Hill to catch a magnificent view of the rising sun over a placid False Bay. The morning promised to be warm and so  the three groups promptly set off at 0630. The route through the fynbos revealed  many flowers in full


bloom and in the clear morning air the view into distant Hout Bay, Table Mountain in the far distance and Cape Hangklip peeping above the horizon beyond False Bay was spectacular.


The Main Group soon pulled away from the rest and by all accounts had a good but uneventful run despite the heavy going through the soft sand. The Recovery group followed them being uncertain as to where to turn off for their shorter route. A lesson learnt there being to ensure that


Leaders do know the route that they should follow.  End result was some of the RG were a little tired by the end having run more than they anticipated combined with slogging through the soft sand.


Kate Le Roux notched up her 50th Sortie so can now wear the Green tee and Bonnie Floyd and Sam Smith both competed 10 sorties so can now take advantage of the speed check-in. 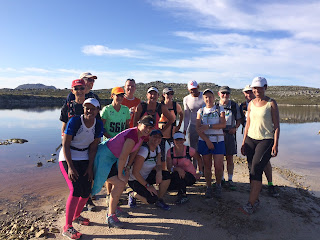 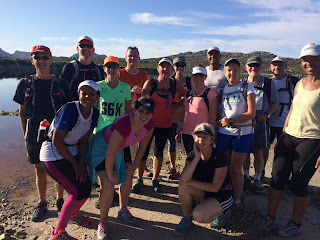 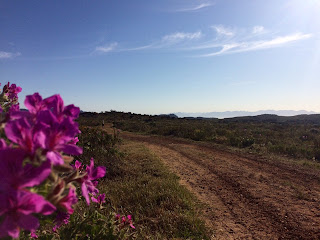 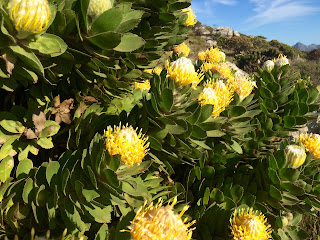 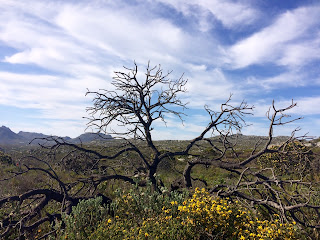 
After route changes, time changes and google behaving like a spoilt child, it was encouraging to see an enthusiastic group of runners arrive at Hole in the Wall for a first foray into Silvermine East from the Boyes Drive side since the fire.

The weather gods smiled on us and it was warm despite the early start. The small main group was ably led by Richard, Gaeleen and Theo coped well with a large recovery group while Peter led Randolph and myself as the walking wounded.

Although the routes on the map were not strictly adhered to, all groups enjoyed scenic, if hilly, runs. The mountain is recovering really fast after the fire and the winter rain. The ground is covered with flowers and even the burnt bushes are sprouting green hairdos. The streams were running down to the sea, very visible without the normal undergrowth.

Peter's group arrived home first in just over 2 hours to find 2 girls, who had turned around from the recovery group due to vertigo problems, waiting at the cars. Not long afterwards the intermingled main and recovery groups made their way down the mountain. Everyone impressed with their hill climbing skills!

A hard run but so good to be able to run in Silvermine again!

Pictures by Faye Elliott. (Sadly Laura's camera has been sweat-damaged and is in the IRU - Intensive Rice Unit. Please send more photos if you have any.) 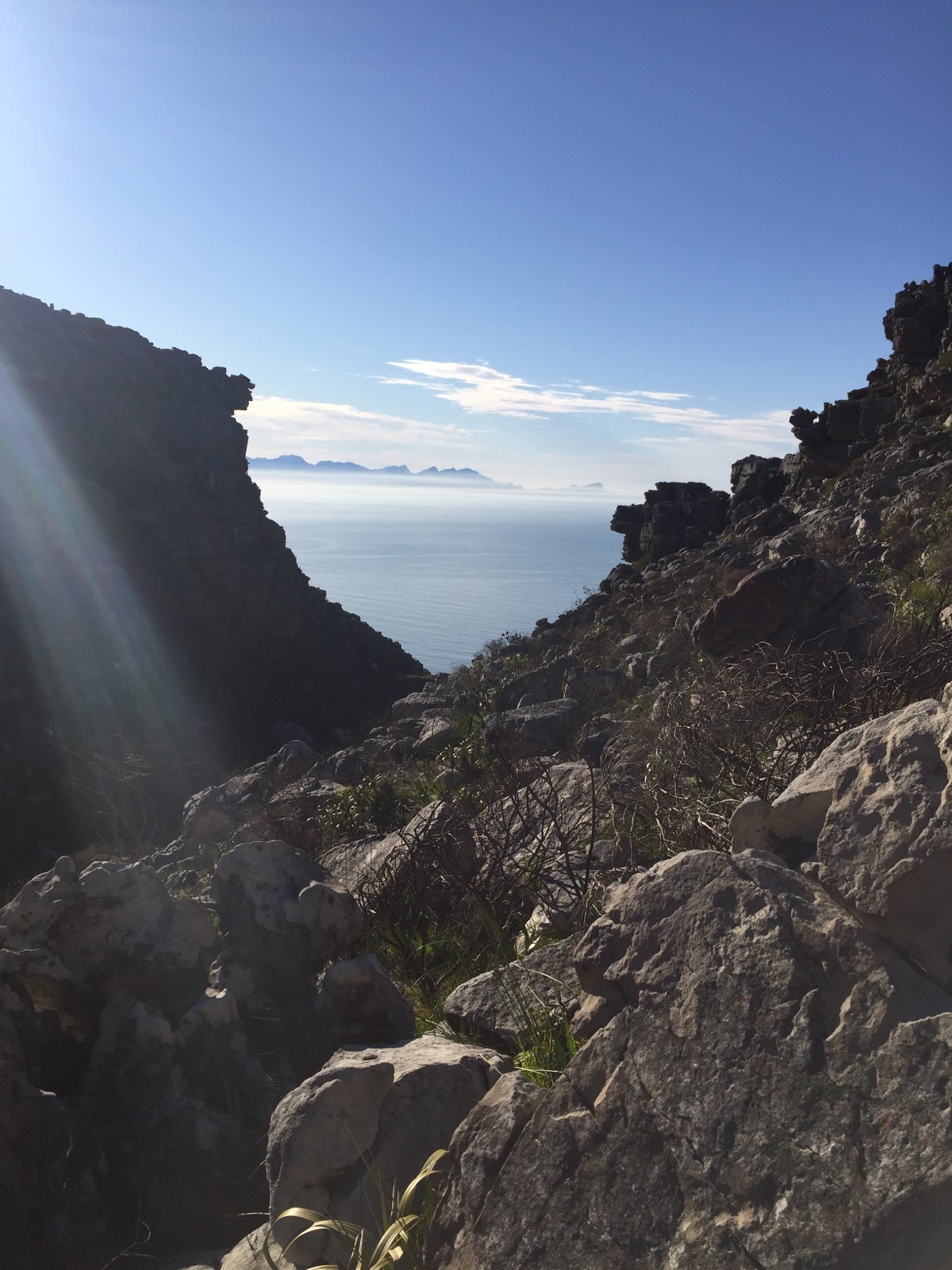 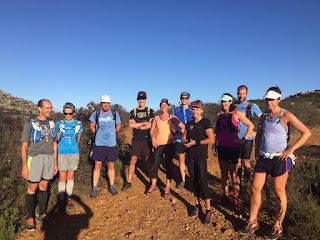 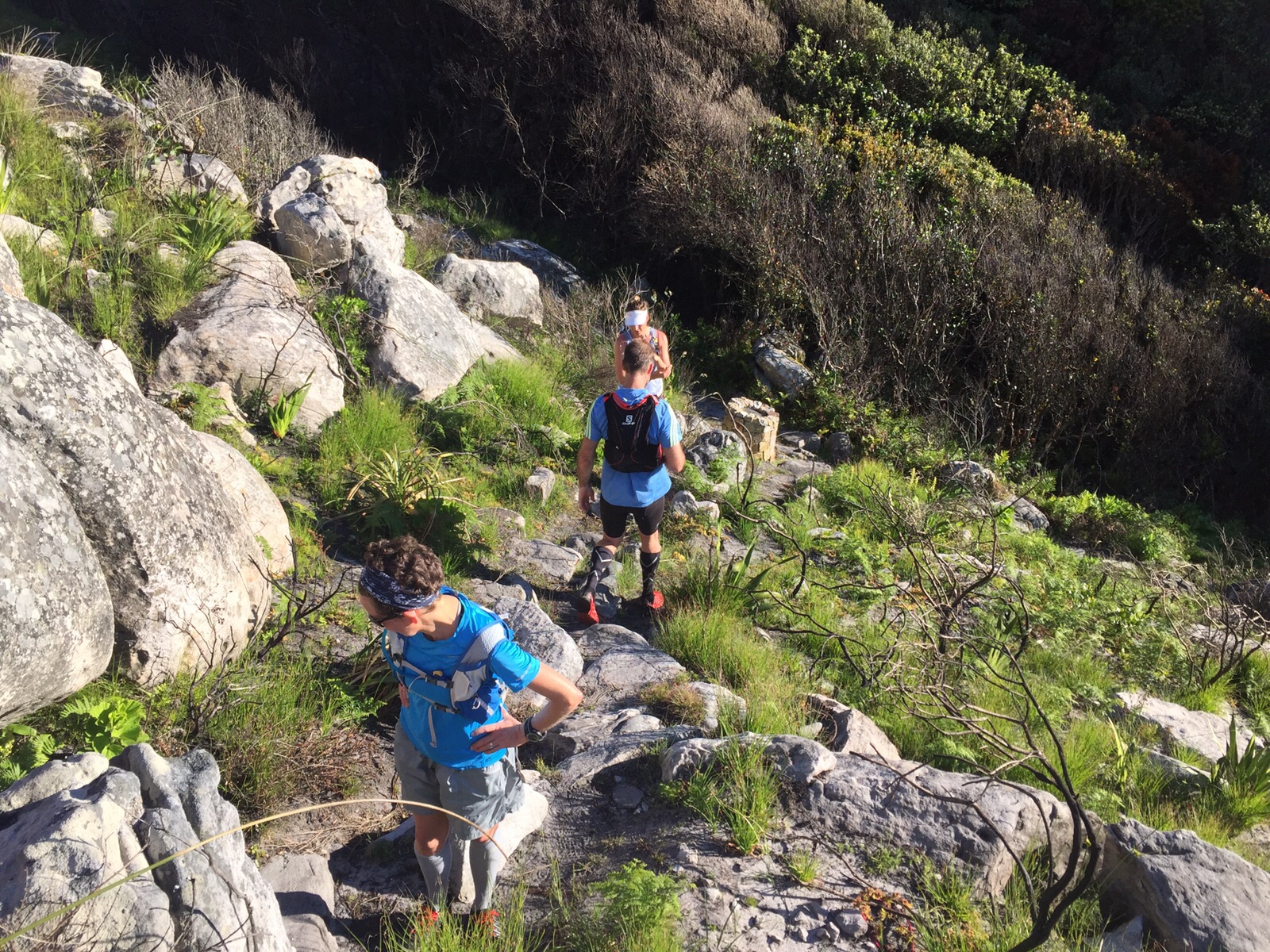 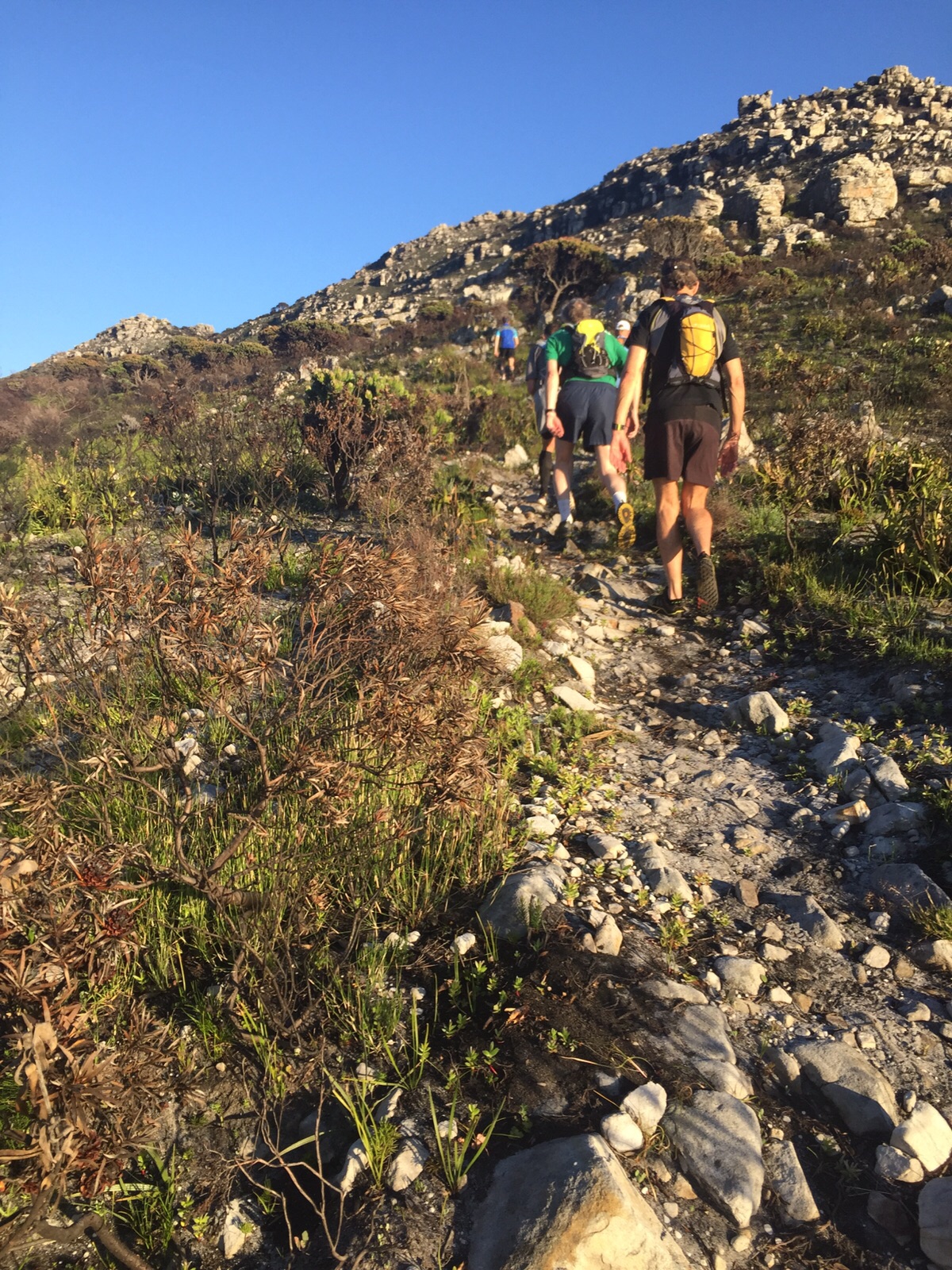 
Our distance for the Maclear's run was about 12.5km, and the time for the group was 3:15 (15 minutes ahead of the anticipated schedule).


We had very variable conditions on the way up. It was a sun-dappled wonderland at the ladders in Skeleton gorge. Ten minutes later we had some rain. Once on top it was very misty and cold. Before the start Geoff said that the temperature would drop one degree for every 100 metres up. We thought he was joking!


We made two decision stops, one at the top of Skellies, and one at the Aquaduct, to vote on whether to continue. Both times it was unanimous to go on to the Beacon. The Beacon did eventually appear out of the mist. Conditions were not conducive to hanging around, and the views were for another day I'm afraid. We did however stop for long enough for frozen fingers to try and operate cameras. Kevin wowed us by taking pictures with his wrist-watch. We also took a few pics with Tamsyn's phone, just in case. The cold did not deter Lesley, who was still in shorts and a t-shirt. He turned down various offers for a spare jacket, despite the fact that his speech was beginning to slur from the cold. "English stiff upper lip" he said.


Things warmed up quickly on the way down, and we all made it back safely.


There were 7 runners in the main group this week.


As for the recovery group, by general consensus, we took the slow road - even slower than planned. Eschewing Rooikat Ravine, eight of us jogged along the contour path from Cecilia car park to Constantia Nek and back as far as the first big waterfall (before Skellies) before heading down to the cars. We finished in 1h40 mins all in and managed to avoid all but a few droplets of rain.


Pete was the sole walker this week, completing 8,5kms on his lonesome.


No major milestones for the trailers today in terms of numbers of runs, but it was Leslie Street's birthday: so Happy Birthday Leslie! 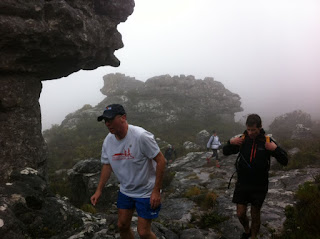 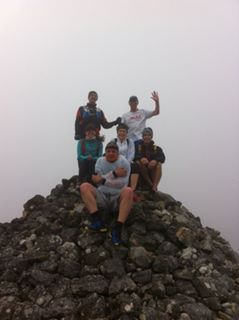 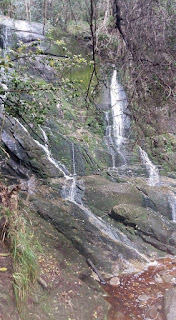 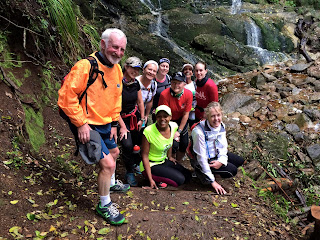 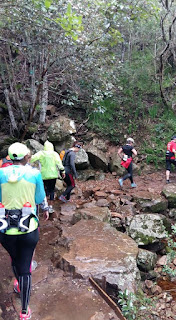 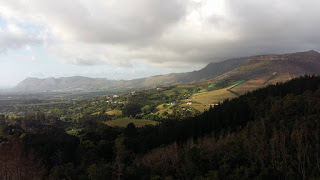 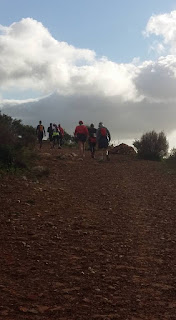 Photos on our facebook page: https://www.facebook.com/TableMountainTrailers?ref=ts&fref=ts
Posted by Lorraine No comments: