Due to popular demand we are about to have our own TM Trailers Buffs made up.

These may  ordered by anyone who has run with us.  If interested please open the attached form.  Orders to be placed before Saturday 14th October,

Don't delay get it away today! 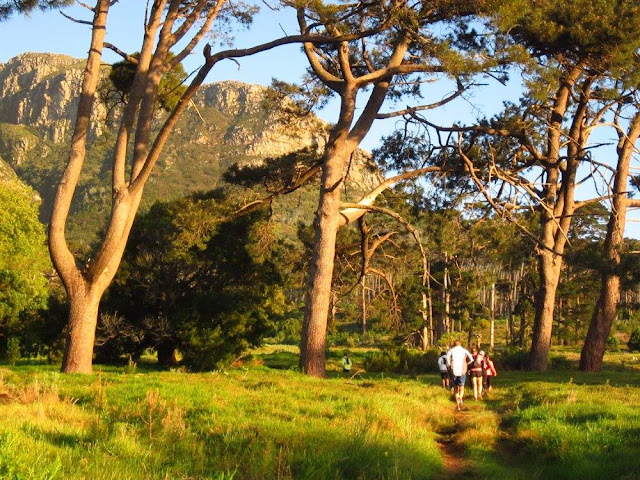 Unfortunately, after preparing her route for this week's run, Jo fell ill and was unable to lead us. 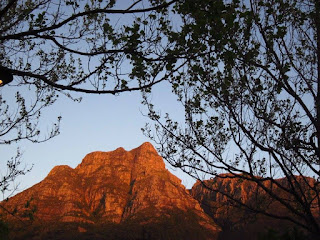 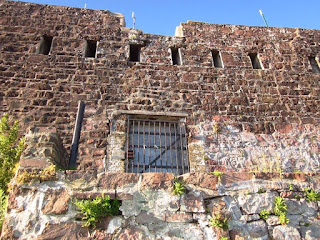 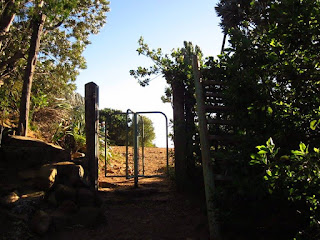 Not to be stopped, a good crowd of runners arrived at the start at the old zoo parking and headed up the off-road trail to Rhodes Memorial and on to Heartbreak Hill. 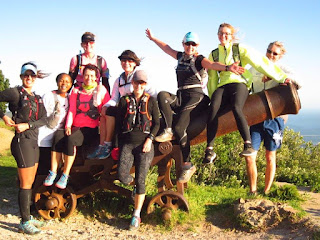 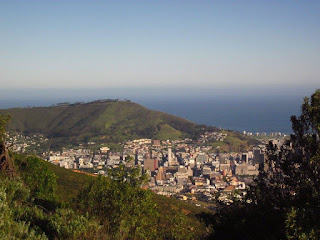 The Medium group decided to take the short-cut steps to the higher level contour path and visited the old blockhouse, while the Relaxed group stuck to the plan and followed the lower path all the way around towards the city before meeting up with the Mediums at the base of the blockhouse.


The Speedsters, however, headed off on a wild meander with Tim being dragged along by a couple of champion newbies which led to him finishing in the car park a couple of hours later in a rather exhausted state.

But back to the trail... We all eventually found our way to the single track that leads through the tall shady eucalyptus and onwards to the start of the boardwalks. At the junction just after the picnic table, we headed down to the path to the cars. The mediums did a spot of sightseeing at the old zoo again, inspecting the graffiti in the lion's den and musing on the lot of the poor ol' caged beasts. 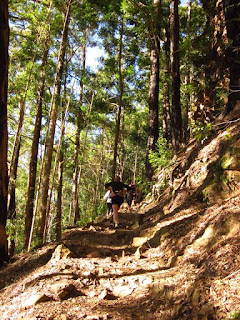 All in all, the medium group covered only about 9kms and we all agreed that the initial short cut was a mistake because we felt we could have run more. The Relaxed group, having obeyed Jo's instructions to the letter, managed 11kms and were considerably more satisfied with their run.

More photos on the facebook page, but a few of the terrain here. 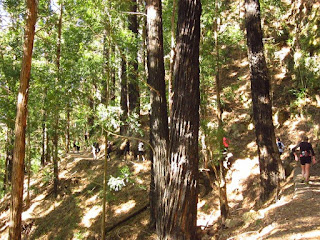 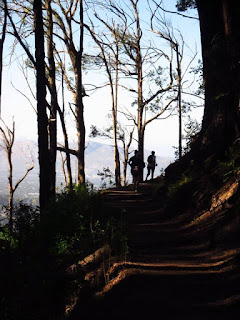 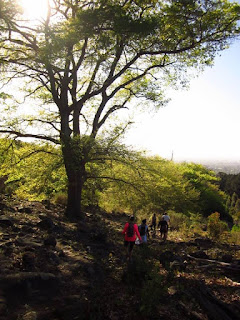 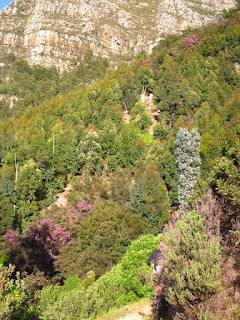 This was the Cape Town Marathon Peace Trail weekend and since most of us either failed to secure an entry or didn't want to run with the crowds, we decided to organise our own version of the route from Mouille Point Lighthouse, up Glengariff Road and onto the mountain, returning through the Urban Park. The distance was about 11-12kms with a quick ascent of Lion's Head for the more energetic! 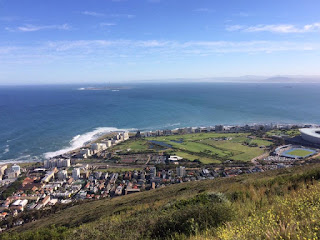 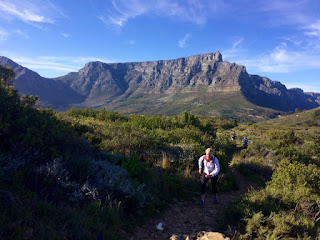 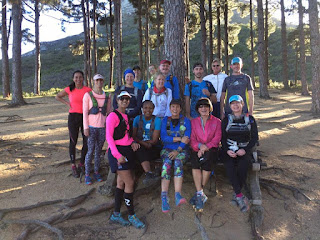 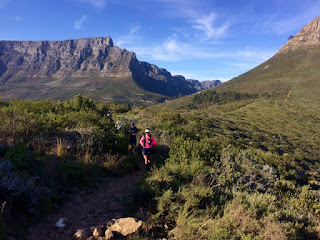 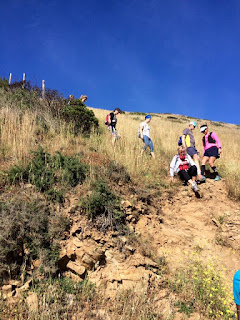 A smallish group of mostly regulars arrived this morning at Constantia Nek for a well loved clamber up the Vlakkenberg steps, on to Picnic Rock and back via Bokkemanskloof.

We split into our 3 groups, the Fast group consisting of only 3 strapping lads this week, and crossed the road to the start of the trail as quickly as possible so that we could get back for the SA-New Zealand rugby game. (And don't we wish we had rather stayed up on the mountain for hours longer... 57-0, I think!) 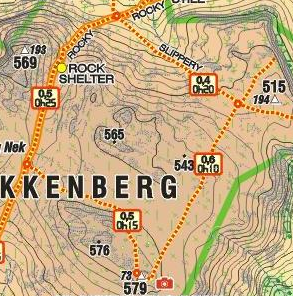 When planning the route, I'd spotted a path on Slingsby's map that I thought we'd never taken before but that led in a sort of square around a slighter lower peak than Vlakkenberg itself and to a viewpoint at the very pinnacle of the peak, and I wanted to see if we could identify it as we ran. There's a camera on the map - and the only thing the Medium group loves almost as much as running trails is taking photos so it was a must-do.

Unfortunately, the lower part of the track, marked 'slippery' on the image, was well hidden, perhaps now on the other side of the fence surrounding the vineyards but, sharp-eyed Theo noticed the other end of the path as we ran over the crest of the hill and stopped so that we could regroup and make a Committee decision about whether we should recce it or not. 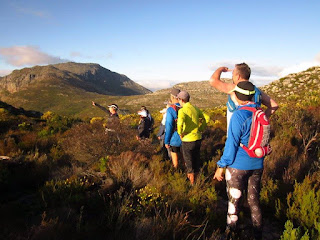 Being the intrepid trailers that we are, we headed off along the track, not knowing how deep it would take us down into the valley before leading to the peak and how much distance and time it would add to our run. We were surprised to come face-to-face with Geoff & crew (Fast group) on the path a few minutes later! Clearly the Fast group has been keeping this little gem a secret from the rest of us! As it turned out, we only had to run some 500m before we spotted the beacon. 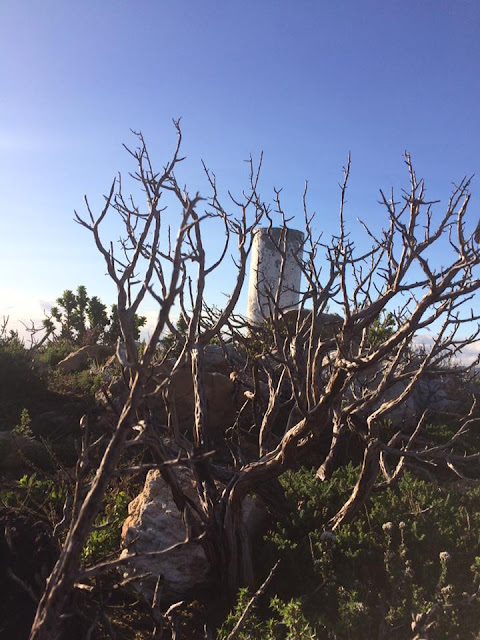 It was quite windy on this little plateau but we, the Medium group, posed as best we could for our first ever photo at the Vlakkenberg Peak. 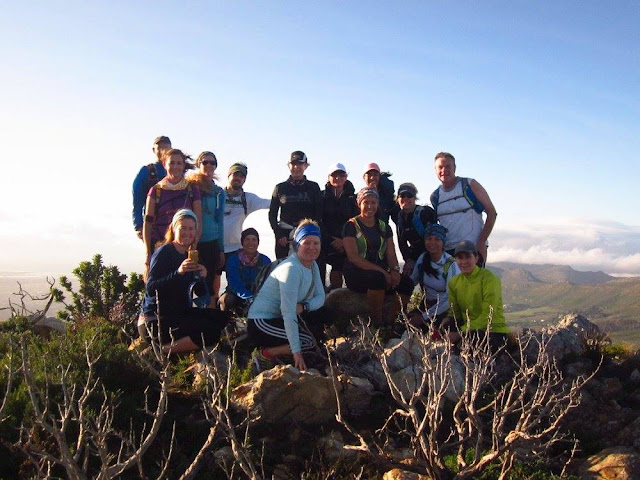 The views from the top were certainly worthy of the little camera icon on Mr Slingsby's map. 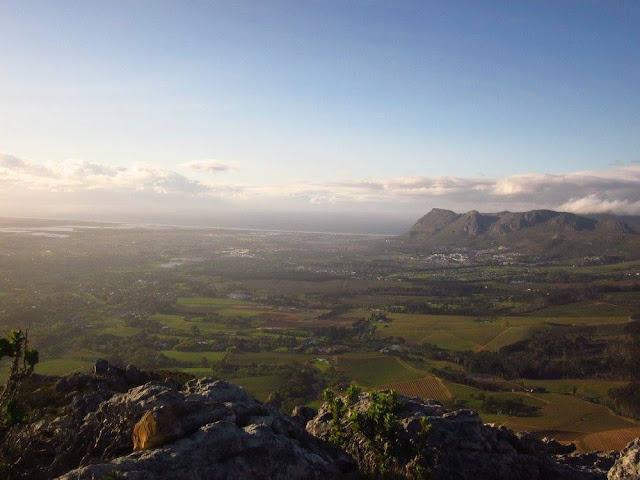 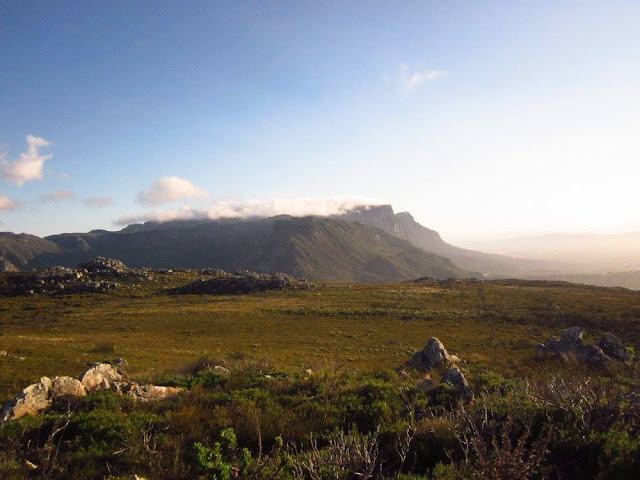 We then backtracked, wondering how we could let the Slower group know about our discovery so that they too could summit Vlakkenberg Peak, but failing an instant cairn, we decided that they'd have to wait to read the blog and see the photos. 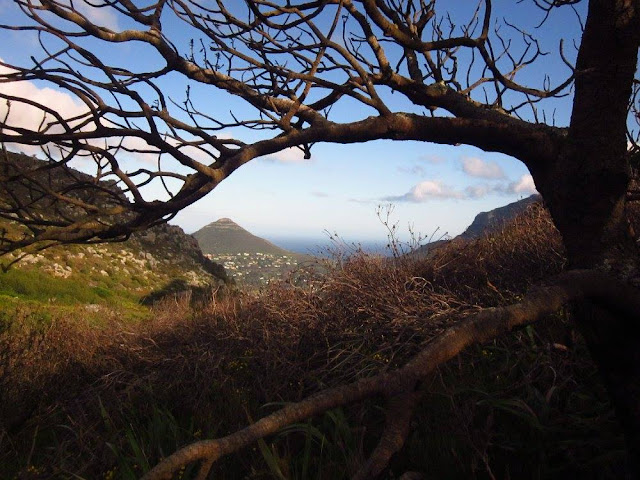 The next few kilometres of this route are some of my personal favourites on this mountain. I don't know what it is about it but I think the almost secret valley so close to home and yet so rarely frequented by locals makes it feel like a sort of Narnia - that magical land just through the wardrobe. It was lovely to see water flowing up there too. We had to dance across a little stream at one low point. Picnic rock was our next stop and the turnaround point, so after another photo shoot... 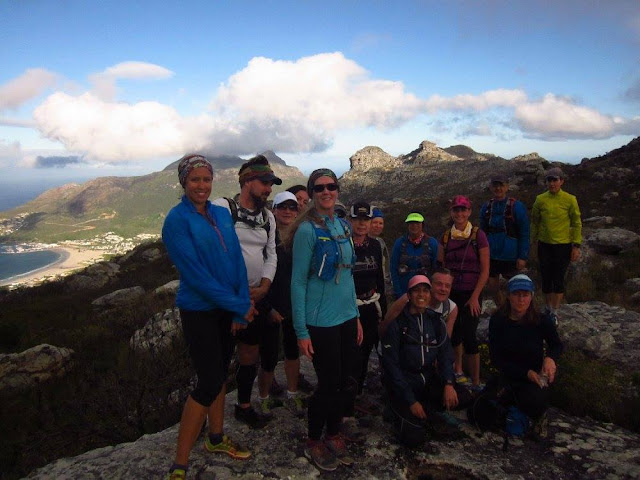 ...we headed back to the four-way crossroads and turned left onto the Bokkeman's kloof trail. 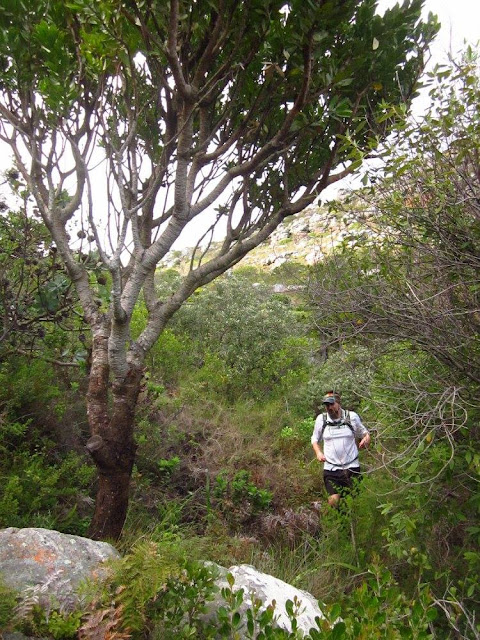 Fortunately there were no twisted ankles this time and the run back to the cars was uneventful - unless you count the barking Rottie and his pal at the top of the suburban area. I'm pretty sure his bark is worse than his bite, but I'm always glad to be in a crowd when I pass him! 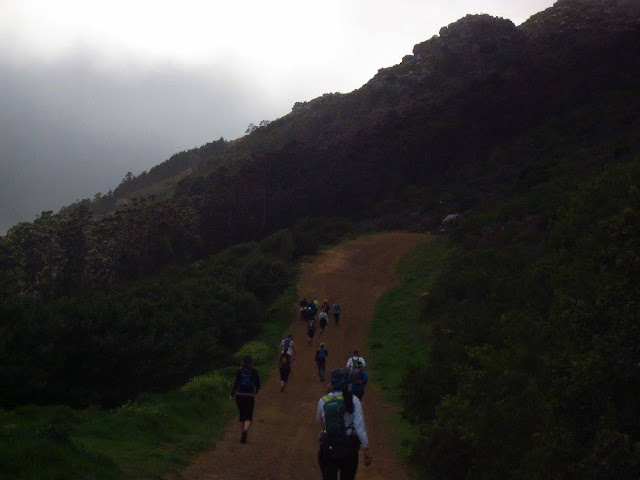 The distance for the Medium group was about 11km in total, including the detour, and we ran for about 2 hours and 20 minutes. The Fast group covered the same distance in far less time :).  The slower group time and distance to follow.

Thanks to everyone for a lovely Saturday morning.

To follow
Posted by Peter D Rogers No comments:

So much for the "cool weather with a light breeze"! It was misty with a strong freezing wind when we all arrived to find out that the Sunbird Centre gate only opened at 8am. Everyone hauled out jackets and waited while Sam played traffic warden and directed cars to the parking outside Silvermine Village.

We started off as soon as we could just to warm up and the pleasant run along the golf course helped get the blood flowing.

The fast group led by Gregg with assistance from Tim and Mike galloped into the distance. Geoff couldn't make up his mind what group he was in, so he was in the middle just before the medium and slower groups.

As we climbed up towards Cave Peak, we entered the misty tablecloth that was blowing over the mountain. We reached the scramble climb without seeing the right rand paths leading to Echo Valley. I phoned the slower group to warn them about the scramble and they said they would discuss it.
The scramble was challenging but the group worked together to get everyone up safely. A group photo of a cold bunch of people was taken before we ran through to the amphitheatre on more familiar paths.

From the amphitheatre it was lovely flowing running down Old Fisherman's path and then back down Dead Man's path to the turn off back to Sunbird centre. The mist and wind remained for most of the run, so jackets were the order of the day.

The fast group were sitting in the shelter of the cars drinking beer waiting for us - just to ward off the cold of course! We were worried about the slower group who took a while to arrive, but when they did they had smiles from ear to ear. They had done the same route as the medium group, including the scramble, and loved it!

Liz forgot her camera, so Judy was the designated photographer of the day. Lots of wonderful photographs on our Facebook page
Posted by Peter D Rogers No comments: