Herewith the report from Saturday past……hopefully nobody will be offended
Some 24 of us gathered in the Tokai mountain bike car on a misty morning, wondering whether the rain would hold off for the duration of our sortie. Whilst waiting for the usual pep talk from the boss man, Alex and Julian were heard discussing what they considered to be a rather interesting topic, the use of the word “sortie”, which, according to Alex, according to Wikipedia, is “a term for deployment or dispatch of one military unit, be it an aircraft, ship, or troops from a strongpoint. The sortie, whether by one or more aircraft or vessels, usually has a specific mission. Alex said that the  term has been adopted from the French past participle 3rd group verb, verbs ending in -ir, with the gerund ending in -ant, "sortir", "to leave" or "to go out" with a specific purpose.”……so now we know.


Peter then described the route that we were to take. One would have expected Julian to listen, because he was to be, as usual, our leader, and he was to be, as usual, taking the wrong route……this week sooner, rather than later. Be that as it may, the group split up, 19 of us chasing Julian and Alex to each regroup, with Peter and Fay (welcome back Fay) leading/sweeping the others. Having eventually reached Level 3, we were treated to words of wisdom by Jana, who informed those who cared to listen, that the best time to drink is “when you’re thirsty”!!!......a deathly silence followed, with a few of us thinking to ourselves “selves, but I only drink when I’m lonely”. 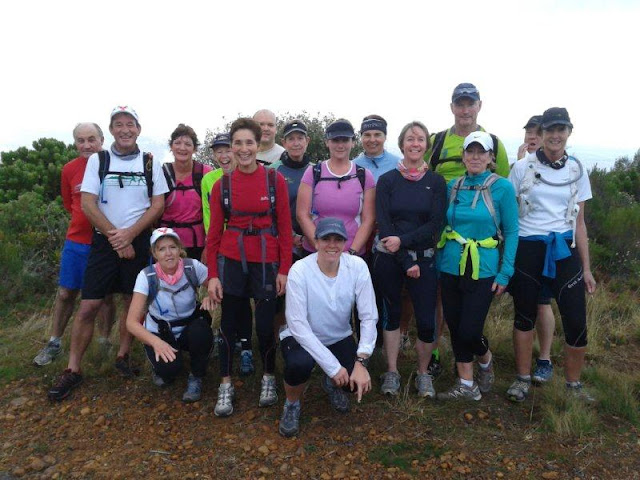 More uphill followed in the direction of the Elephants Eye cave (maybe we’ll go there next time?) and we eventually reached the Snake Trail, Cobra in brackets (which is a good place for a cobra), which we galloped across, without anyone giving so much as a thought to the cobras. A photo shoot followed, then we made our way along some single track, before hitting the jeep tracks back down to the parking area. It would be remiss of me not to mention Randolf covering the final 4km in a blistering 15 minutes 8 seconds flat, albeit downhill.
All in all, roughly 11kms in 2 hours. Some post-sortie chit chat followed, with the only “blood” being recorded by Gareth, who, when asked about his tumble, replied that he is a mathematician and had lived in the USA for the past eight years……we do have some strange people in our group. One of the men, who shall remain nameless, possibly because he wasn’t baptised, was heard to explain “I can’t wait to get home and rip my girlfriend’s knickers off”……apparently they were cutting into his thighs and were extremely uncomfortable on the downhill stretch just before the finish.
Jackie spent a few minutes discussing her snapshots of the Leucadendron coniferum, otherwise known as dune yellowbush and the Erica viscaria, which will hopefully give the reader some insight into the intelligence within our group.
Lastly, I thought I’d mention that I couldn’t help noticing what I considered to be a rather amusing sign as I was on my way home past the Manor House. It reads “Horses Please Drive Carefully” and it conjured up thoughts, not only of horses that can drive, but can also read. A slow drive past a troop of baboons ended a glorious morning on the mountain with a good bunch of fellow runners.


With thanks to Jackie for the photos


“The mist lay thick over the Peninsula at 7o’clock on Saturday morning, the outside temperature reading 6.5 degrees, but not a breath of wind. We wound our way through the mist up Kloofnek Road (in the car) to be greeted in the car park by lots of smiling faces in glorious sunshine. We took a few moments to cast our eyes over the Cape Flats and Atlantic Ocean, which were covered in mist. The day could surely not get any better……or could it? It was great to have Peter back, and we were treated to his usual questions……”whistle”?......”yes”, said (almost) everyone……”water”?......”yes”, said (almost) everyone etc etc. Allow me to digress for a brief moment……one day, in the not too distant future, Peter will ask you all to take your whistles out and blow them, then we’ll see who has a whistle…….seriously, please all ensure that you have (at least) a whistle, water, warm clothing and a cellphone (more about the cellphone later) with you when you are on the mountain. So, without further ado, 26 of us were off running at exactly 7.30am, 25 bodies haring after Julian, who was doing his usual Usain Bolt impersonation along the Pipe Track. Things progressed rather swimmingly, with a few uneventful regroups (apart from Mike informing us that there are only 3 types of people in this world, those who can count and those who can’t), until an hour or so into the run, when a group of us were in the vicinity of Corridor Ravine. Julain’s cellphone rang, he answered it, and it was Gaeleen (on her 61st sortie), who had originally phoned Jackie, who had then phoned Julian, who had asked Jackie if she could phone Gaeleen to phone him……something to do with the reception (or the receptionist)……short story long, we are left wondering whether Julian “did his usual”, or whether Gaeleen and her sub-group decided to give the “stairs” a miss……or indeed, whether Gaeleen was missing Julian’s company and just wanted to have a little chat to her beloved. Then it was back down the “stairs” to the waiting mob and a sprint/trot/jog/shuffle/plod (delete where applicable) along the Pipe Track to the car park. No incidents to report, lots of other people enjoying the mountain, a fantastic morning out , with a great bunch of regulars, plus a few very welcome newcomers.”


With thanks to Jackie for the photographs 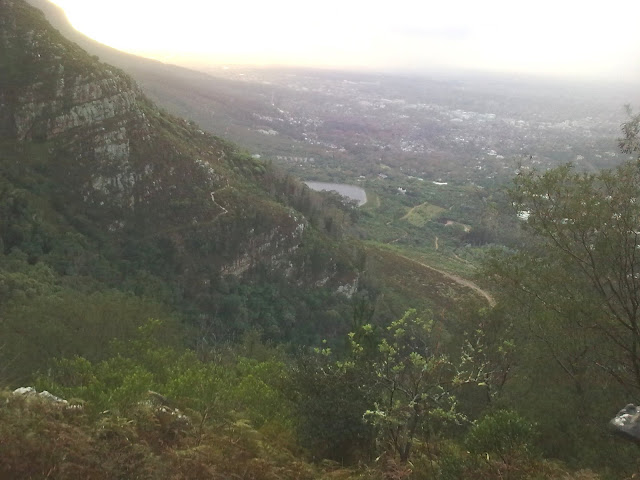 “Picture the scene……7.20am Saturday morning, light rain falling, 8 degrees outside, a dozen or so cars under the trees at Constantia Nek parking area, Julian doing his pre-run warm up on the gravel, are any others going to turn up? Fast forward to 7.30am, the rain has stopped and 16 bodies are “ready to rumble” after listening to Gaeleen’s lecture. Someone says “I can’t feel my legs”, to which our resident comedian replies “I’m not surprised, they amputated your arms yesterday”. Hahaha, and Julian was off like a scalded cat, along the t*r for a few hundred metres, up the steps to the intersection with the first road, then up the steps to the intersection with the second road. A quick regroup, then along the contour path, stopping to admire the views and the waterfalls at Cecelia Ravine, Nursery Ravine and Skeleton Gorge, then down to just above Kirstenbosch and back along the roller coaster to Constantia Nek.

A beautiful morning with a great bunch. Relatively incident free, save for Tissa losing her footing and sliding down some wooden steps on her coccyx, tearing her running tights and exposing her bum, or rather half of it, to anyone who dared to look, then Elizabeth losing her footing and landing in the Skeleton Gorge stream. Two hours and ten minutes of pure joy ended just as the heavens opened and the rain came belting down. Thanks to Julian for leading and only taking two wrong turns and to Gaeleen for sweeping……and pointing Julian in the right direction. And congratulations to Michelle and Peter for completing the "Old Fisherman’s Trail Challenge”.

Dave Bywater provided this report of the run 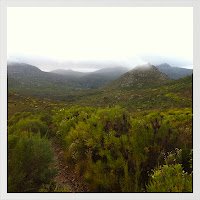 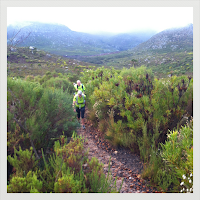 13 of us left the Retirement Village at 7.20am, after having received a comprehensive briefing from Julian. He spotted 3 young (female) racing snakes, so decided to fire up the afterburners as we turned on to the mountain some 200 meters after the start. The 4 of “them” averaged about 4 minutes per km for the first 4 or 5 km of the Old Wagon Trail path, reaching the start of the circular “no mountain bikes allowed beyond this point” in about 20 minutes. We ordinary people arrived a few minutes later, admired Julian and his elite group, and, as we were about to regroup, watched them set off again at said 4 minutes per km. At which point Alan had a moment of inspiration!!! He called them back for a magnificent group photograph, which should appear on our website, after he has banked the proceeds of the sale to Runners World (the International, not the South African version)……but I digress. After a brief stop, it was more of the same for Julian and Co, with us struggling to keep them in our sights. Fortunately, after a few more blistering kms, Julian “did his usual”!!! Say no more, Seamus coming to his rescue, pointing us in the right direction. We covered some breathtakingly beautiful single track through the forest, over boardwalks and mountain streams, before descending the Old Wagon Trail path back to the start. We covered between 12 and 13km in just under 2 hours. Note to the Editor: Please check distance and time. Thanks to Randolph for sweeping for the first 75% of the run, until he could hang back no more, covering the descent in a new TMT record. There were, fortunately, no incidents to report. A final word of gratitude goes out to  Julian and the racing snakes for ensuring that this ranks as one of the quietest sorties ever experienced, for which we (men) are deeply grateful. 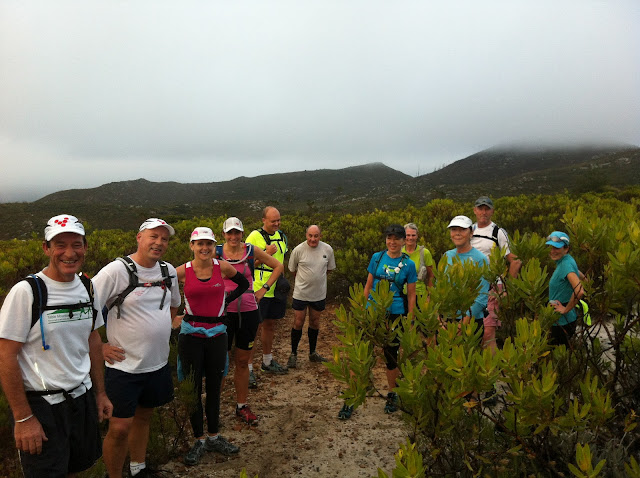 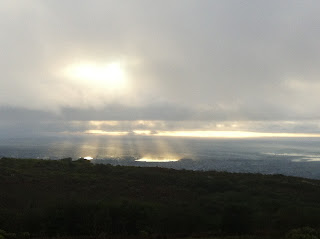 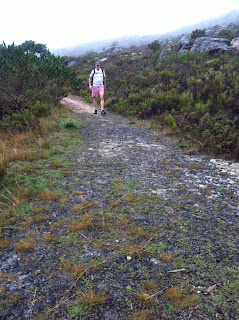 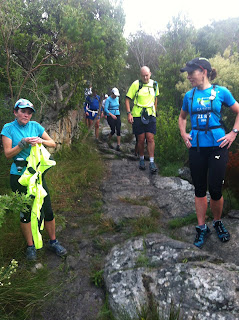 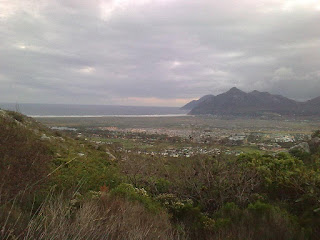 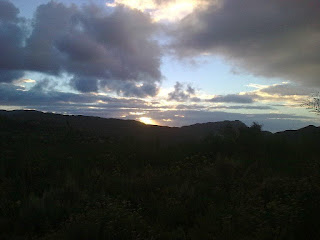 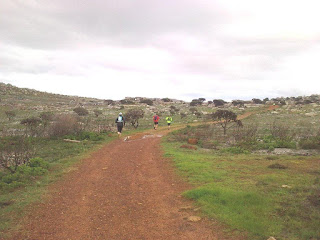 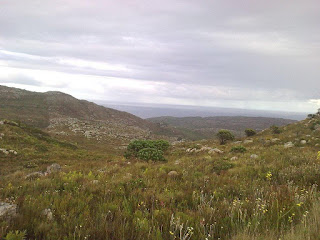 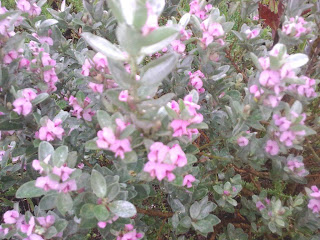 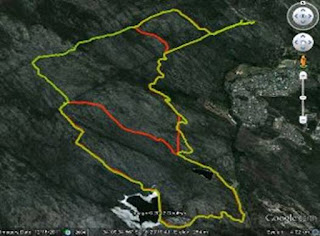 Gaeleen reports that for some reason twice out of 3 times, we have taken the wrong turn-offs on this route.  The green is what we should have run! – red is what we did run (apart from a small ‘straight section’ where my watch was off)  - so we were on the puffer route first,  then ran to the Lewis Gay dam, followed by Kleinplass dam, and then on the return we cut across back to the puffer route and managed to finished the route ‘correctly’ – well done to Michiel and his front runners for keeping us together.
Posted by Peter D Rogers No comments: