A medium-sized group turned out for this sortie, including a number of first-timers to the group, - and one first-timer to trail running! The weather was clear and good, but with a  sneaky cold breeze that was very noticeable in the more exposed places on the route. But, with a predominantly uphill first half to the run, the wind soon became less of an issue.

Faye and the walking group set off first, and after a few hick-ups with parking, the lead and recovery groups set out into the Silvermine valley and up to the contour path, where the lead group proceeded along the “dead man’s path” to the amphitheater and the recovery group did  a slightly shortened route, mostly in reverse, also to the amphitheater. The 2 groups met at Kalk Bay peak, and again on the jeep track heading back to the parking. Here the lead group did a short detour in order for the 2 groups to finish approximately at the same time.

All in all, quite a tough run, but with great scenery & views, - and some really good and run-able single tracks. 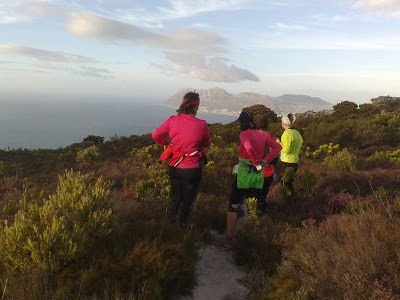 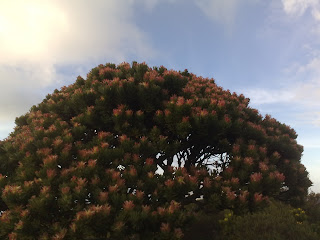 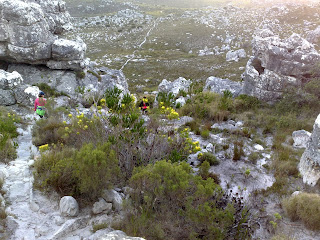 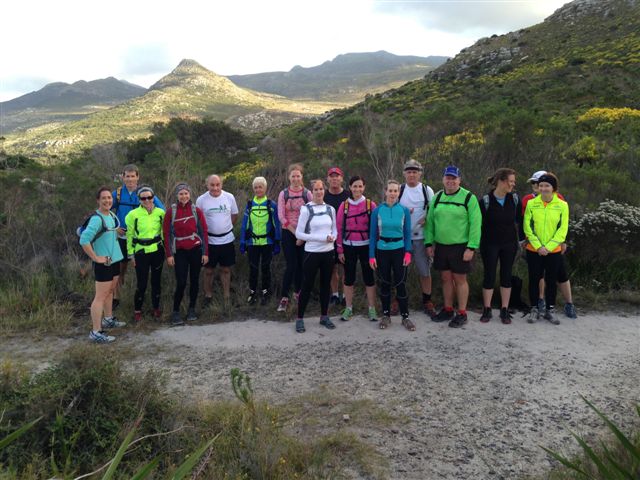 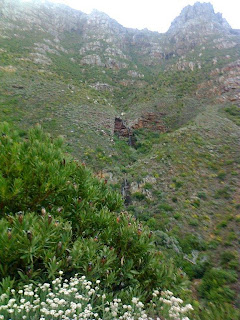 Gay who managed this weeks run reports as follows:

A few 'newbies' joined, arrived without water, whistle
etc,  so were told the importance of the four W's and we were on our way.
Lovely winter's morning, no wind, little chilli to start, but soon warmed up on Chapman's Peak drive.  Led by Richard, swept by Dawn - I had to take over
the role of official photographer as we were missing our usual photographers (Alan, Faye, Jackie and Lorraine). 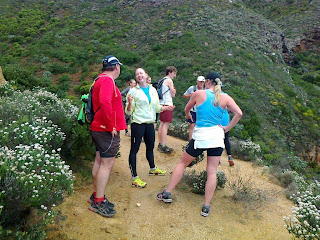 Calm morning out there, lovely flowing streams and waterfalls. Once down to Chapman's peak drive, it was a couple of km's downhill back to the cars - for some road running is a little hard on the knees, and for others, a nice way to stretch the legs - we even passed Hout Bay's local trail running hero, Ryan Sandes, on his way up
Chapman's Peak Drive.

Faye led a walking group of about 4 - they drove up to East Fort and started from there - avoiding the firs km of tar (and hill).
We did pass them along the contour path and left Geoff behind at the end to make sure they all arrived back safely. 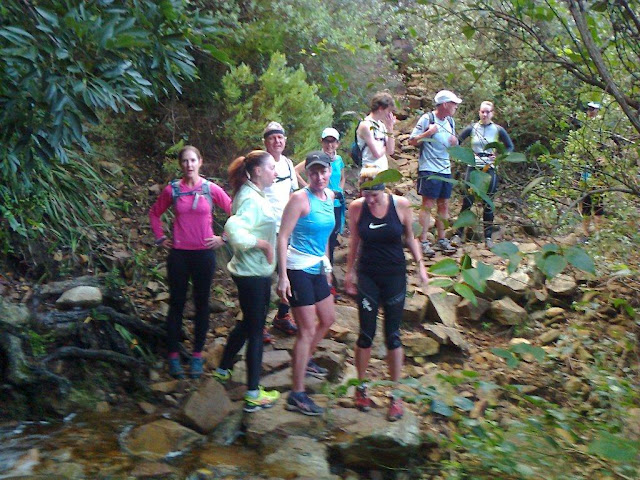 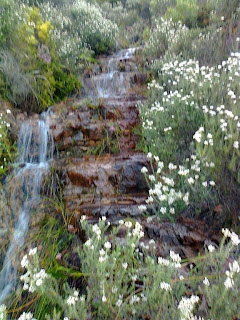 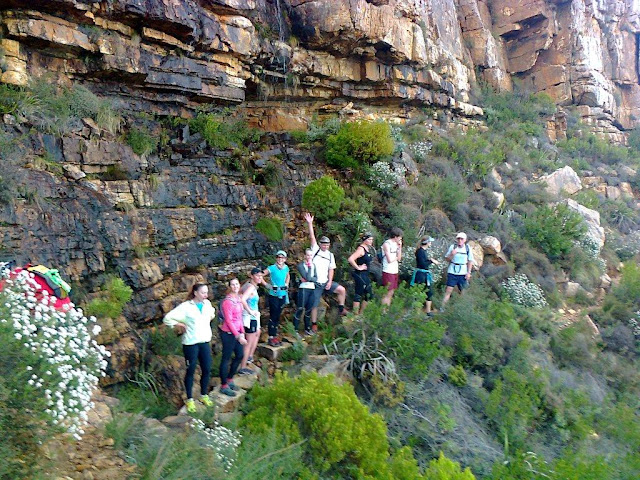 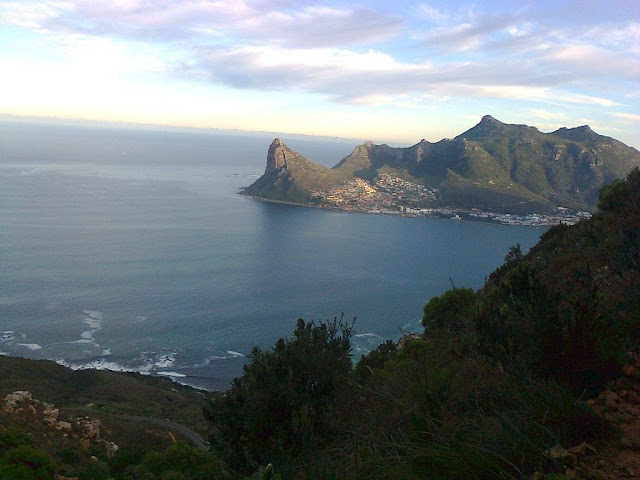 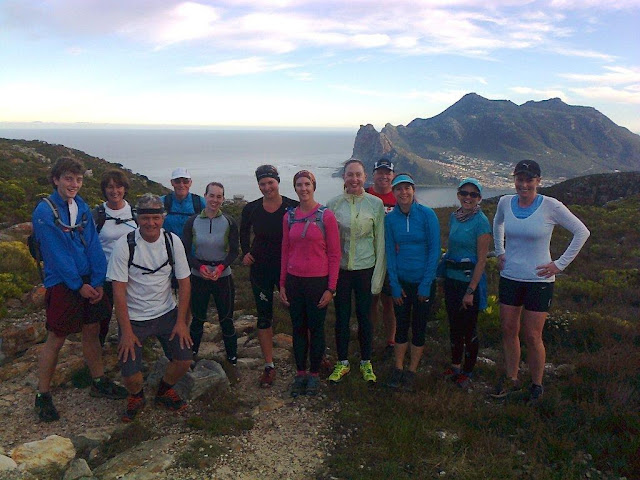 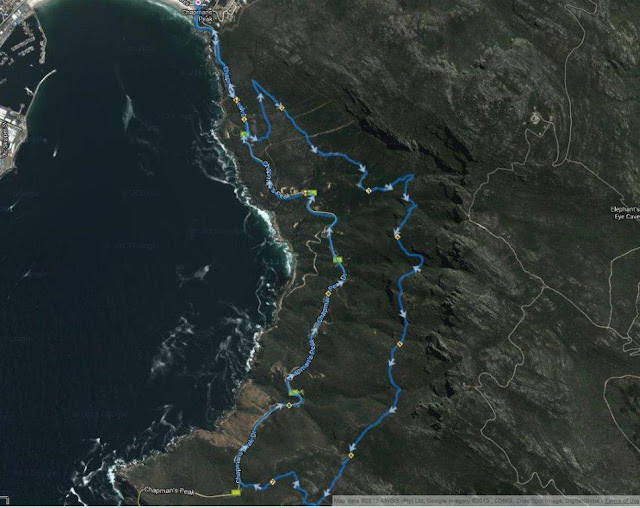 With thanks to Gae who stood in for Dave as run manager and as photographer, Richard for leading and Dawn for sweeping.
Posted by Peter D Rogers No comments:


Richard and Dawn Rossiter this week's run managers/leaders, ran their planned route last Monday to ensure it would provide a suitable physical challenge, technical excitement and all the good things trail running has to offer.     It lived up to expectations for the 21 runners and Fay's walking group.

Lorraine  who who found time to take the photos had this to say:  "
I have to say, that was one of the hardest runs I've ever done with TMT. It was not only up, up, up at the beginning (it always is!) but it was fast, as the pace seemed to be set by the guys from Tim's group that were up front. I'm sure they felt it was slow, and I suppose it can't have been that fast, as we were caught by the recovery group at our first photo stop. We made a narrow escape - literally and figuratively. 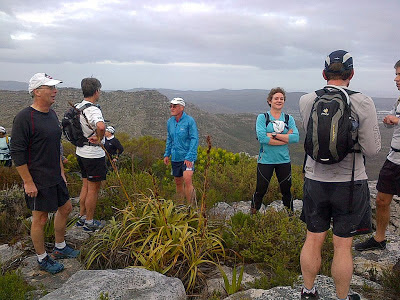 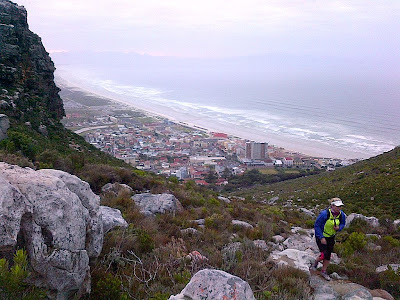 By the time we reached the Silvermine SANParks sign, it was dawning on us that we had only done half the course, and that meant... yes, we had to go back up that mountain we'd just come down.

There was a minor detour by the back few of the group as Ralph Solomons lead us astray, but we reached a beacon that the rest of the group missed out on and used the opportunity for a lovely photo! (When in doubt, smile and take a photo.) We also discovered that our cheap whistles were completely useless: we blew and blew and blew to no avail. No-one heard us! Fortunately, someone up front realised they'd lost us and they waited while Gae galiantly led us back to the correct track.
The second half of the run was punctuated by complaints of sore butts, sore soles, sore ankles, sore quads, sore knees, in fact sore everything! Some of us felt our legs shaking as we contemplated the last few metres along the contour path towards Boyes Drive. More comments such as, "When you hear contour path, you don't think 'up'," and "It's Richard. Richard likes 'up'", so on. Personally, I think Richard is part dassie.

The weather was perfect though and the company fabulous, as always. Thanks, TMT, for yet another fantastic Saturday morning. Three hours! Phew! 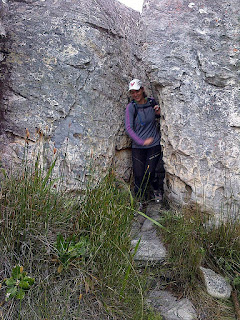 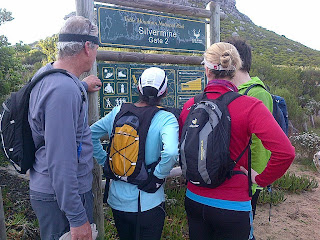 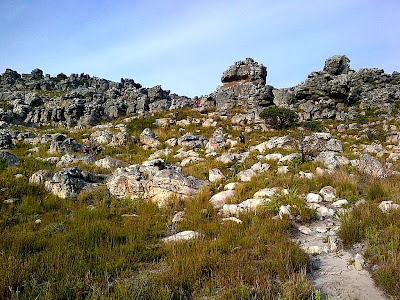 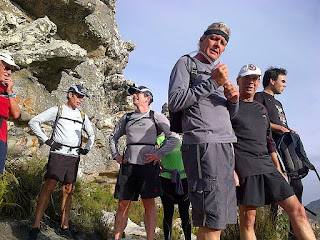 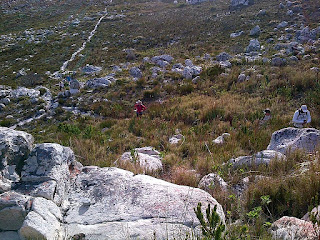 Thanks to Richard for leading the main group around a new and stimulating route, Dawn for navigating the recovery group over new ground and Lorranine for finding the time to take the photos. 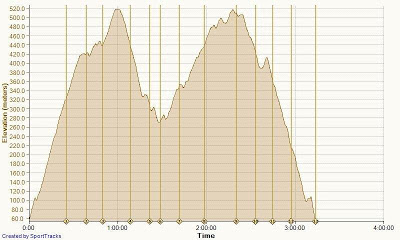 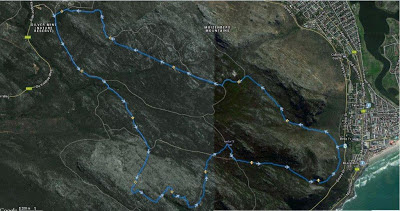