Although it had unexpectedly rained earlier in the morning, after all this is Cape Town! and more looked possible, this did not deter about 50 runners from both TM Trailers and Tim's longer faster group turning out.  But more snags along the way as by 0710 about 30 cars were queued at the Silvermine SE boom ready to enter but no warden was in sight.

So with access still denied by 0720  it was agreed to shift the start of all the runs to the Sunbird Centre.   Fortunately that boom was not down so eventually all the groups were able to set off over slightly revised routes.
Tim's group were the first to leave and were last seen streaking up the trail, presumably attempting to make up the time lost due to the delayed start?

Richard being no stranger to this area took the main group off and around dead man's path and up onto Kalk bay peak,  seeing a few proteas along the way and eventually overtook the recovery group, which had followed a more direct route, along the trail past the ominous looking Tartus cave. 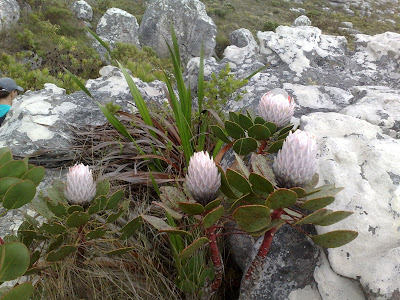 Overall a good run along one of our most scenic routes no problems but for the missing boom keeper and Michael who injured his foot.

Many thanks to Richard for leading and Gae for sweeping the main group and congratulations to Lauren who completed her 25th sortie and received her Red Tee for her effort.

Fay reported that her walking group also had a wonderful sortie

28 turned up for the start of our annual attempt to predict the actual route that will be used for the Two Oceans 10km Trail Run.

Yes the organisers do publish a map of sorts and do give a delightfully picturesque description of the route but as we have found over the years actually following them is another matter.

Despite a sudden burst of rain we got organised into our three groups and Michael set off leading the main group, myself the Recover Group and Fay her walking group.    Thereafter all I can say is that we all returned having, as is customary, got lost- yet happy that we did follow more or less something like the predicted route.
To sum up: A good practice run over a route known for its treacherous roots,loose rocks and damp slippery bits. 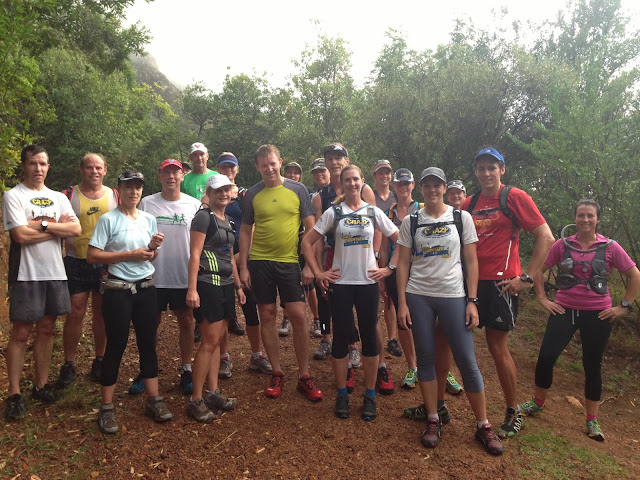 Photo thanks to   Nick Pentreath
Posted by Peter D Rogers No comments: