It is not often in January that we have overcast conditions and drizzle for a run.  The runners took advantage of the cooler weather to circumnavigate Devil's Peak - a rather tough route.  All three groups left the Newland's fire base along the jeep track and set off towards the Block House.  The gravel jeep track gave way to a wet single track, and back to gravel at the Block House.  From here, the walk/run group headed south along the contour path, to complete a 11 km circuit in just over 2 hrs.

At the Block House, the Main and Recovery groups headed north, above Tafelberg road, along a very flat and easy contour path.  The Main group continued for some distance along this contour path before turning left off the contour and up past Oppelskop.  From here, the Main group headed over the saddle to the top of Newlands Ravine.  The Recovery group turned too early and instead took a rather difficult zig zag route up to the saddle.  However, they did make it to the top of Newlands Ravine.  Both the Main and Recovery groups had a steep climb down Newlands Ravine and into Newlands Forest.  Once in the forest, the moss covered rocks and many tree routes made this a slow-going downhill. 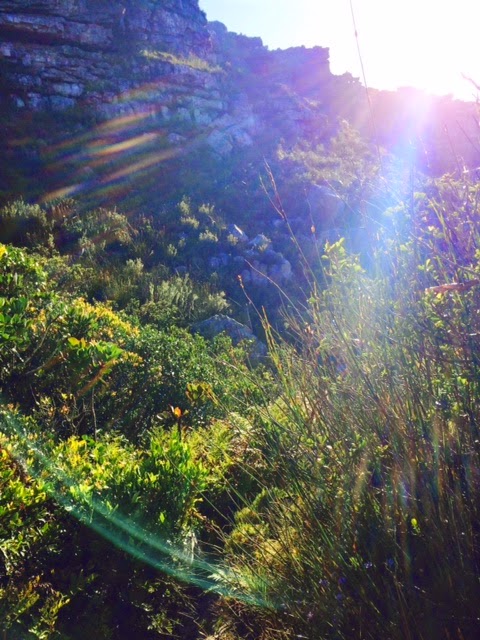 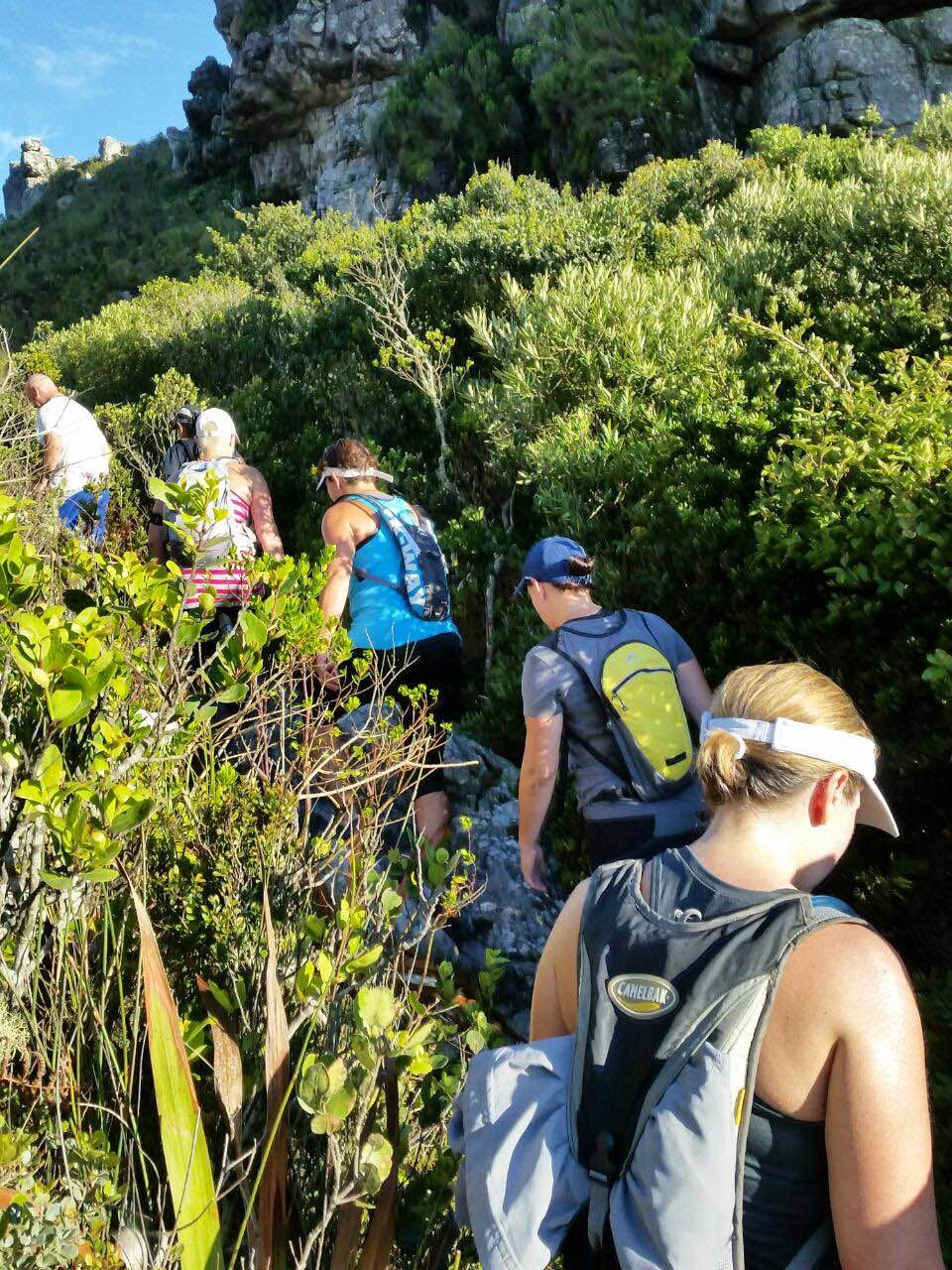 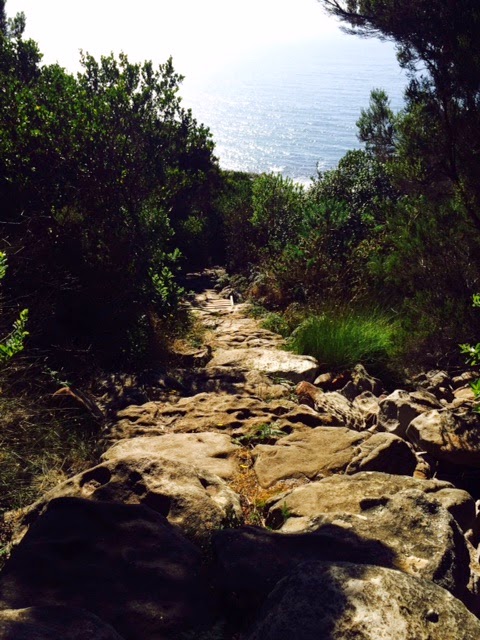 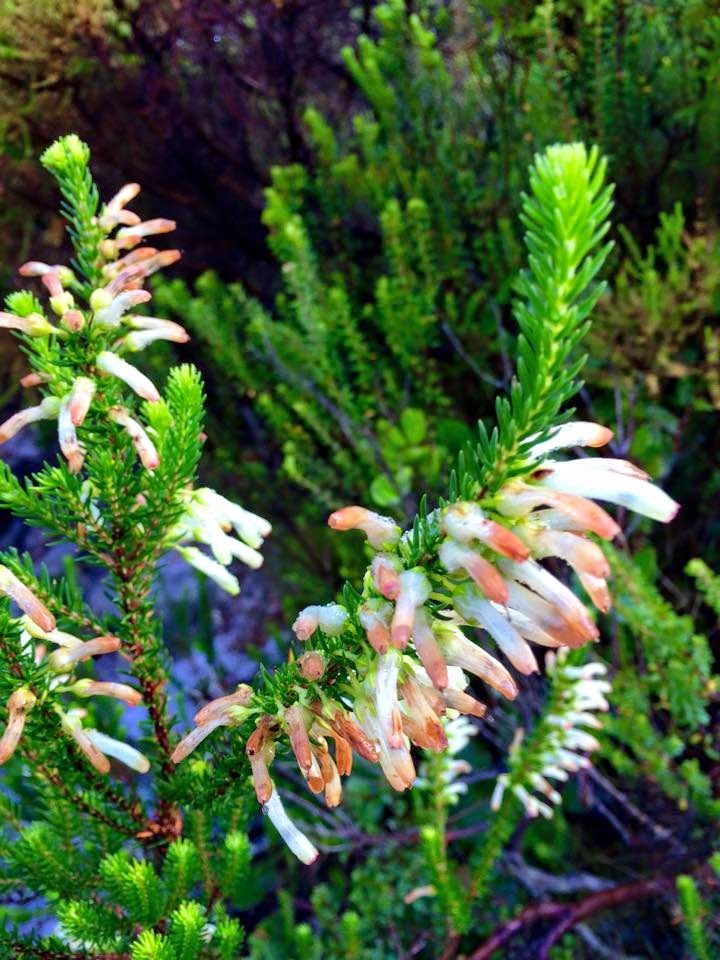 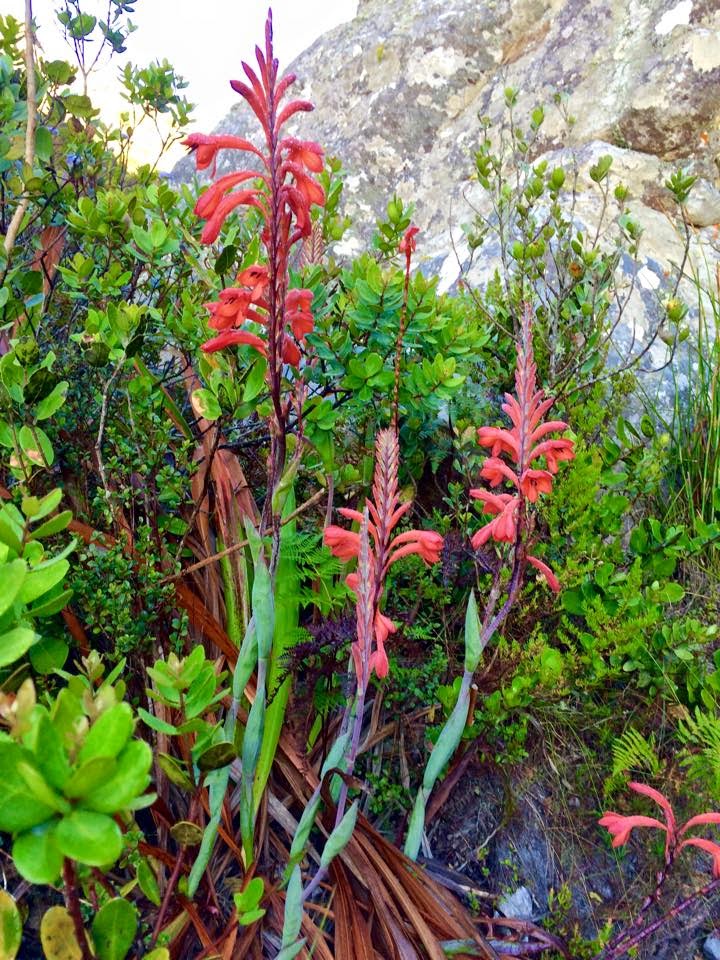 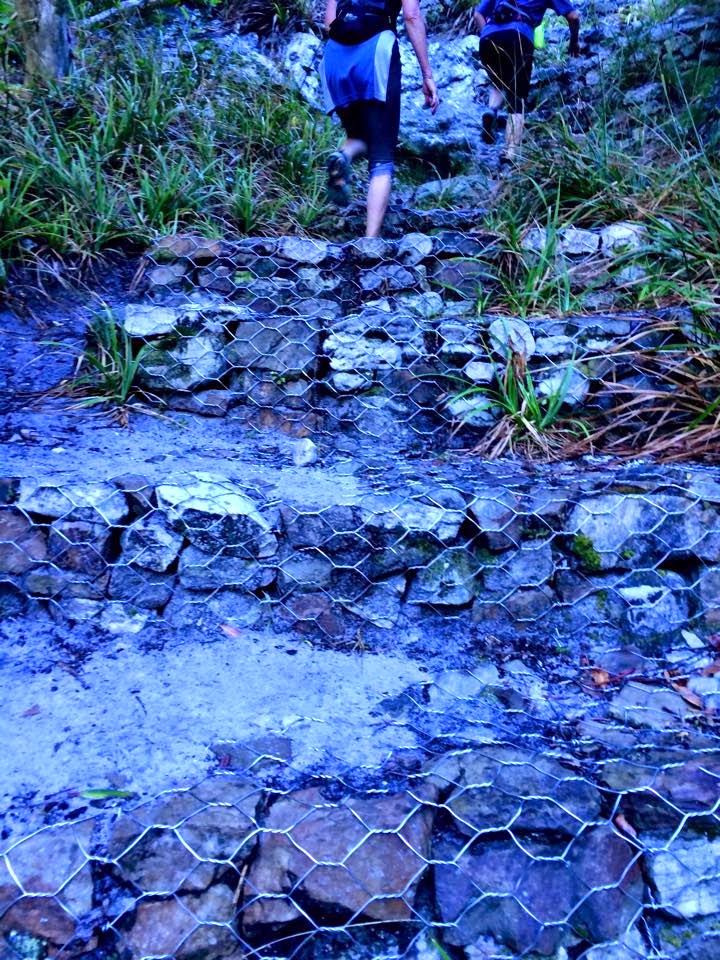 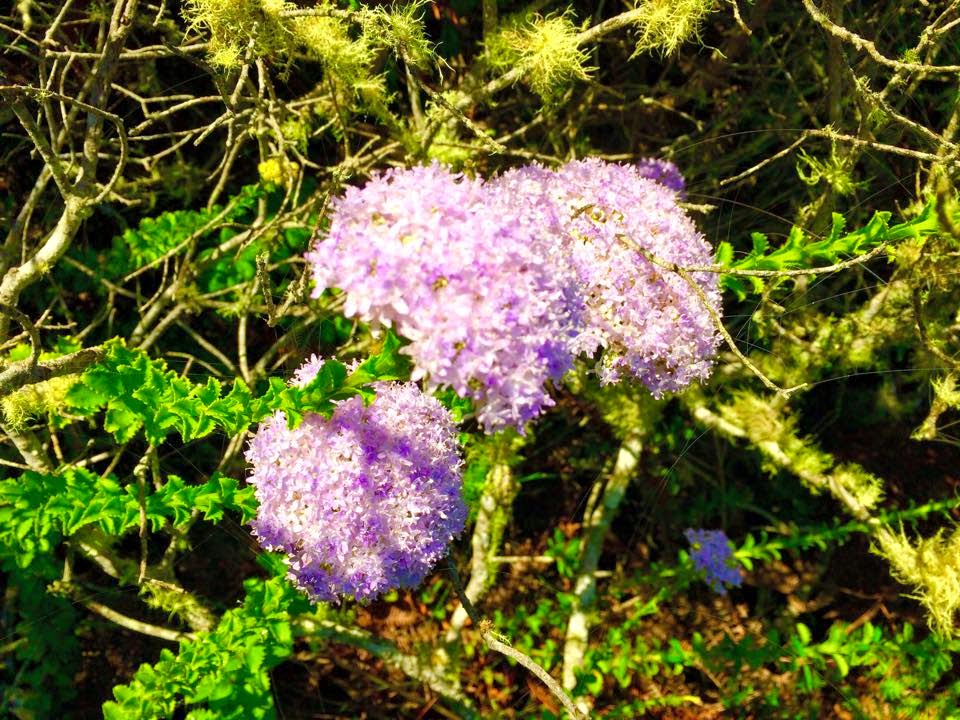 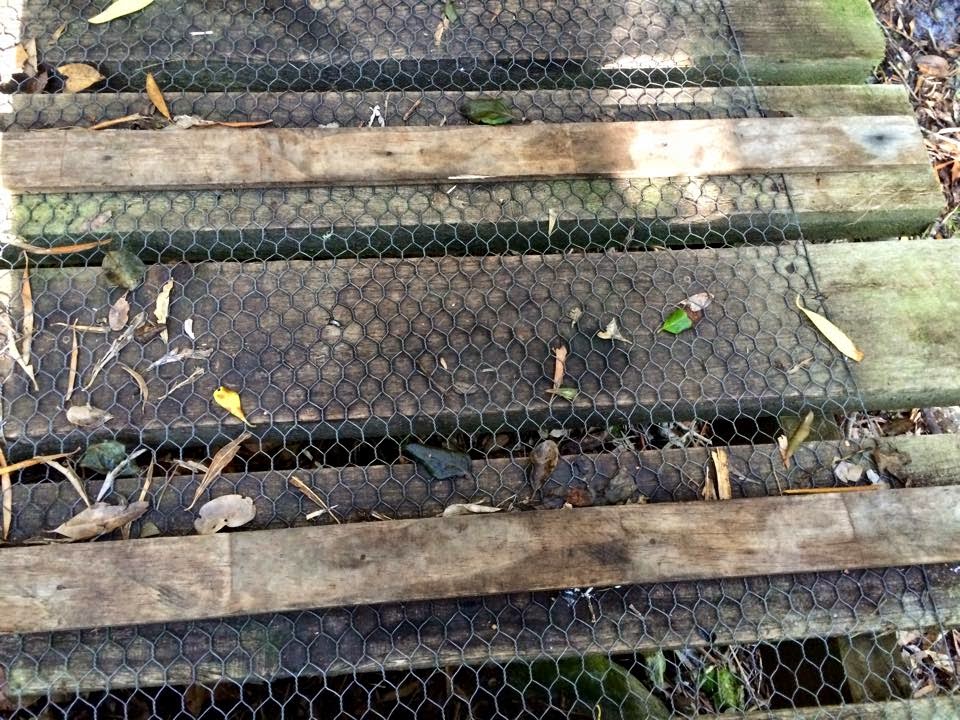 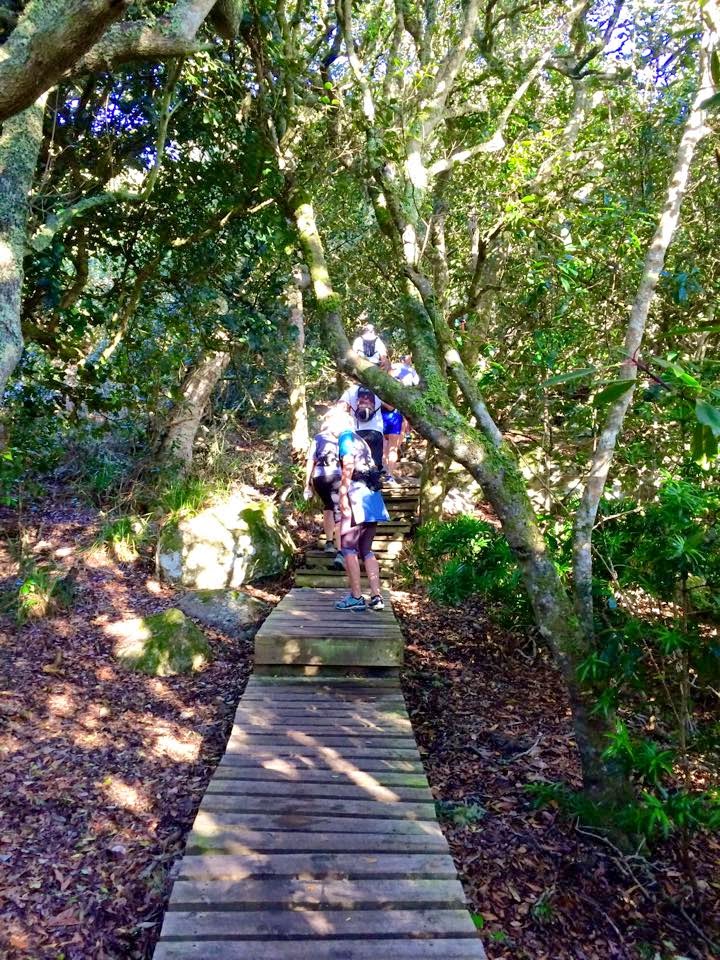 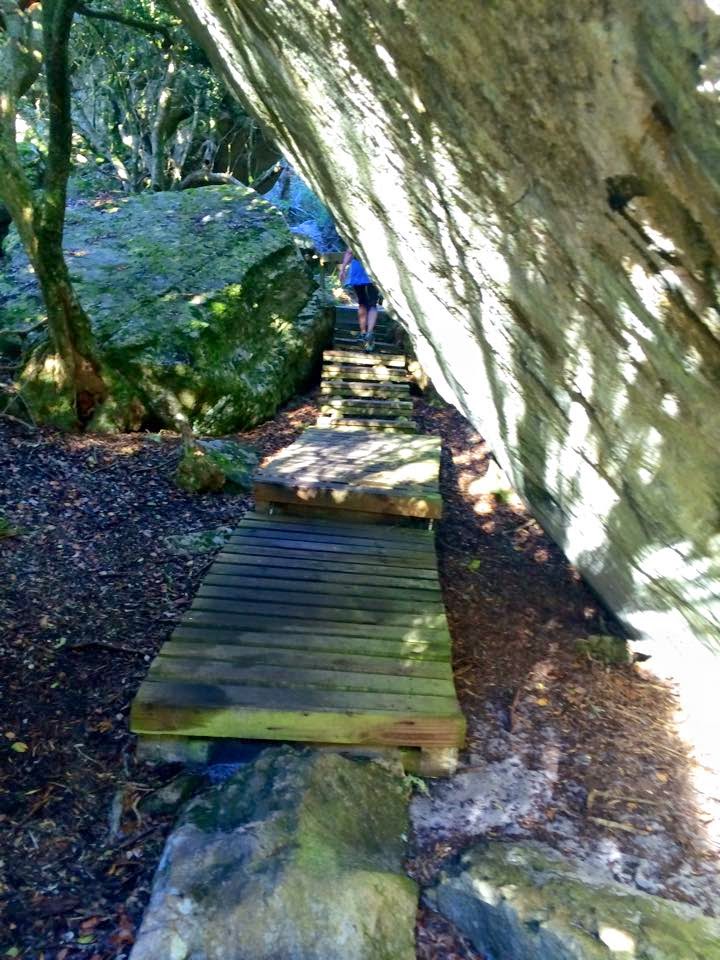 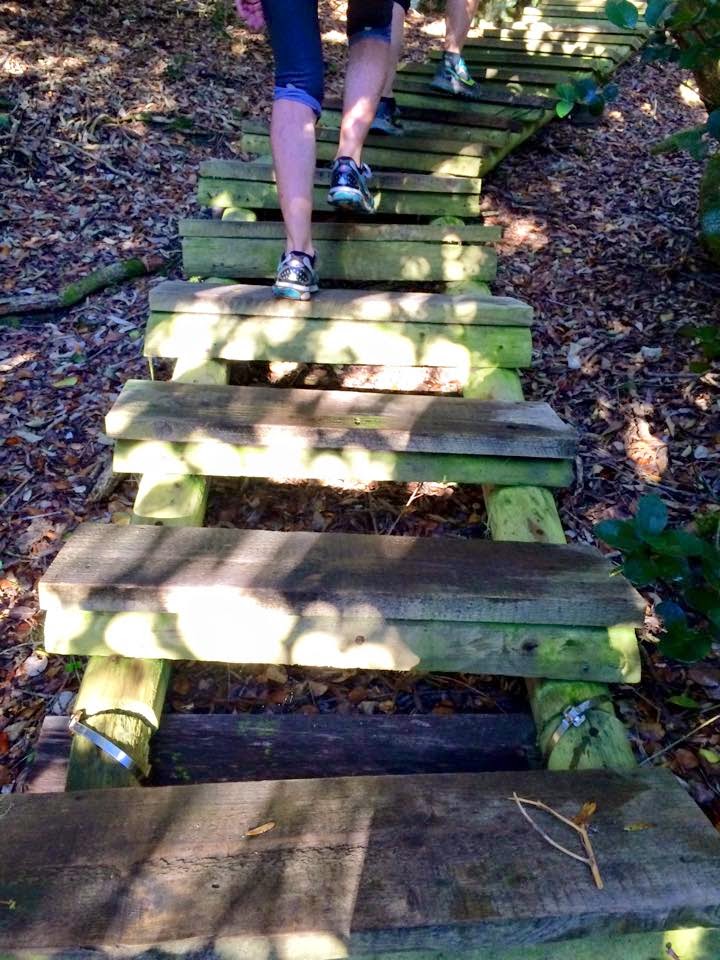 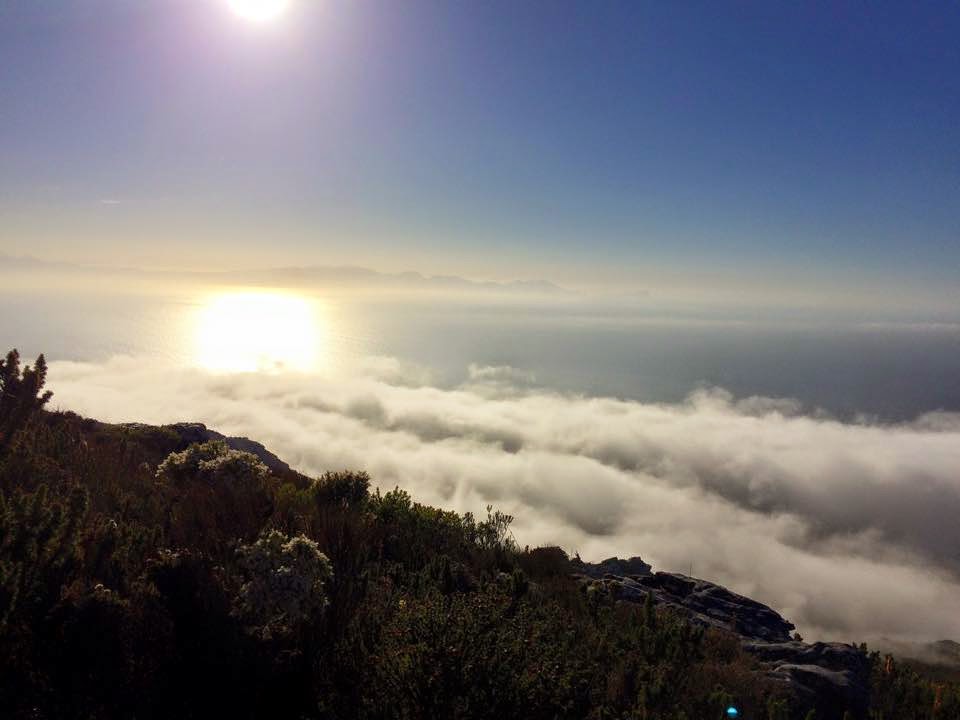 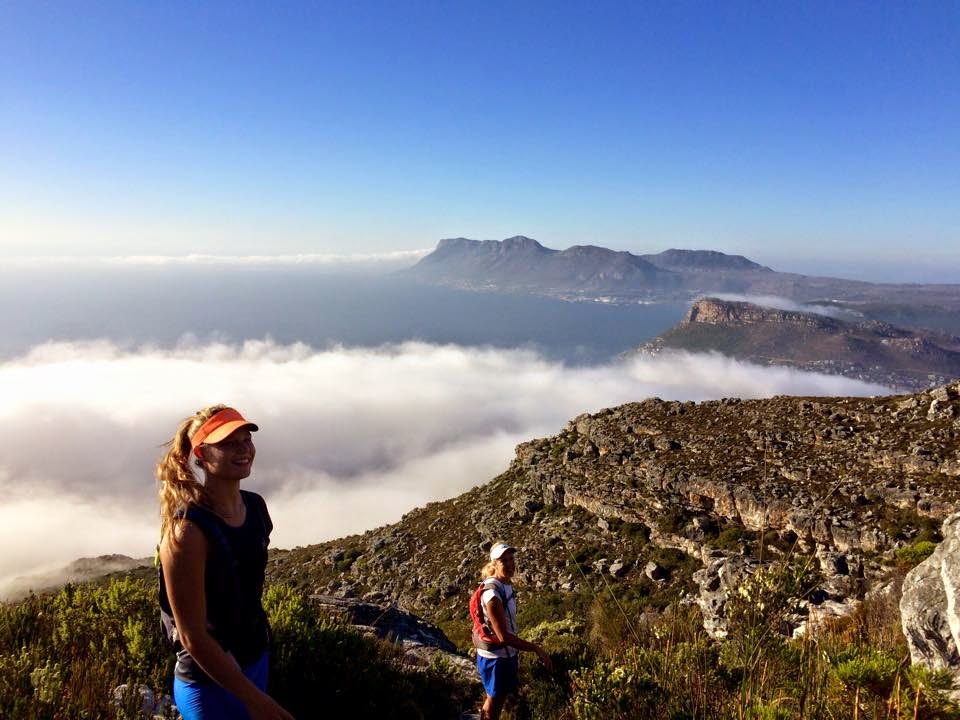 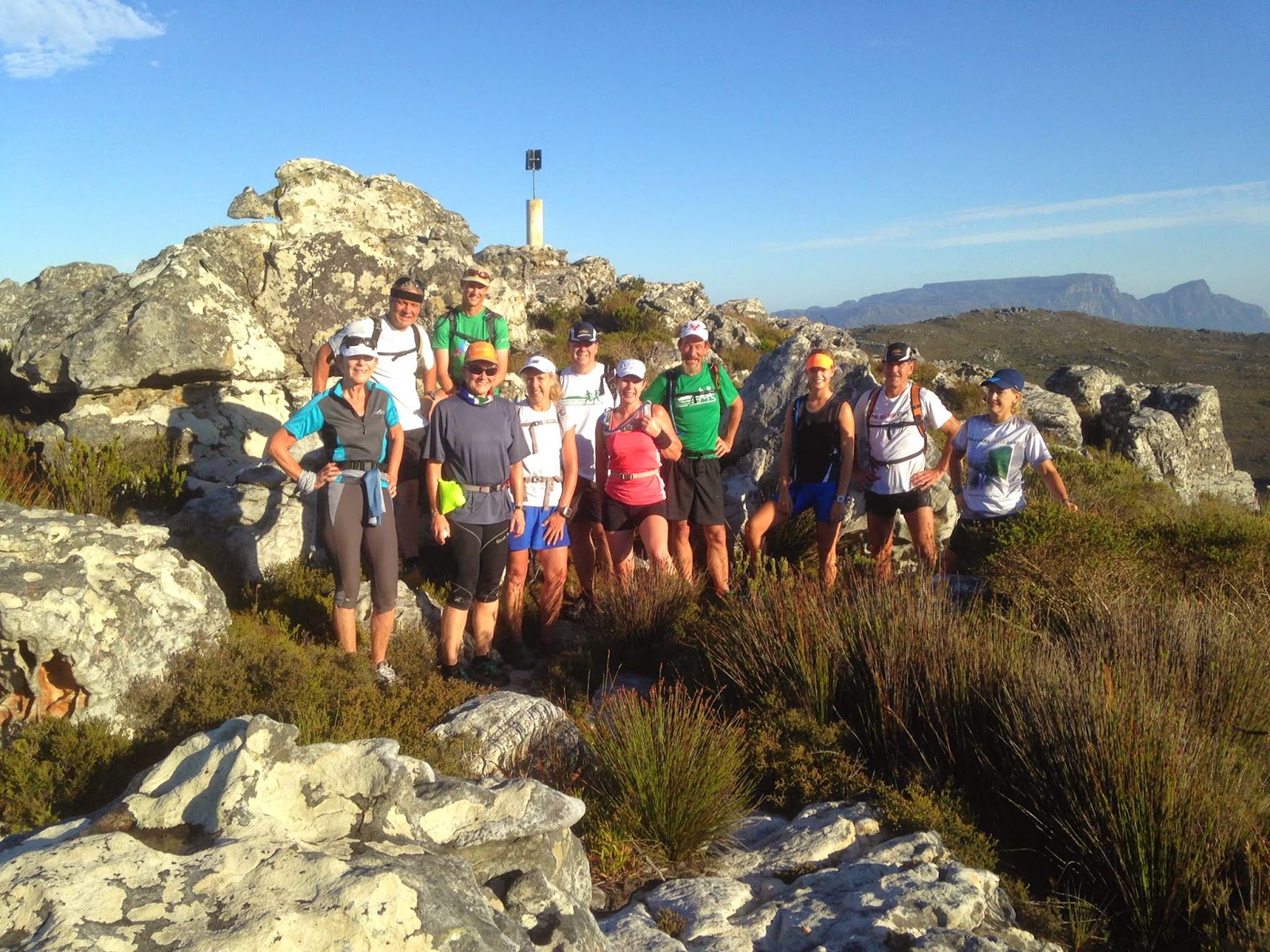 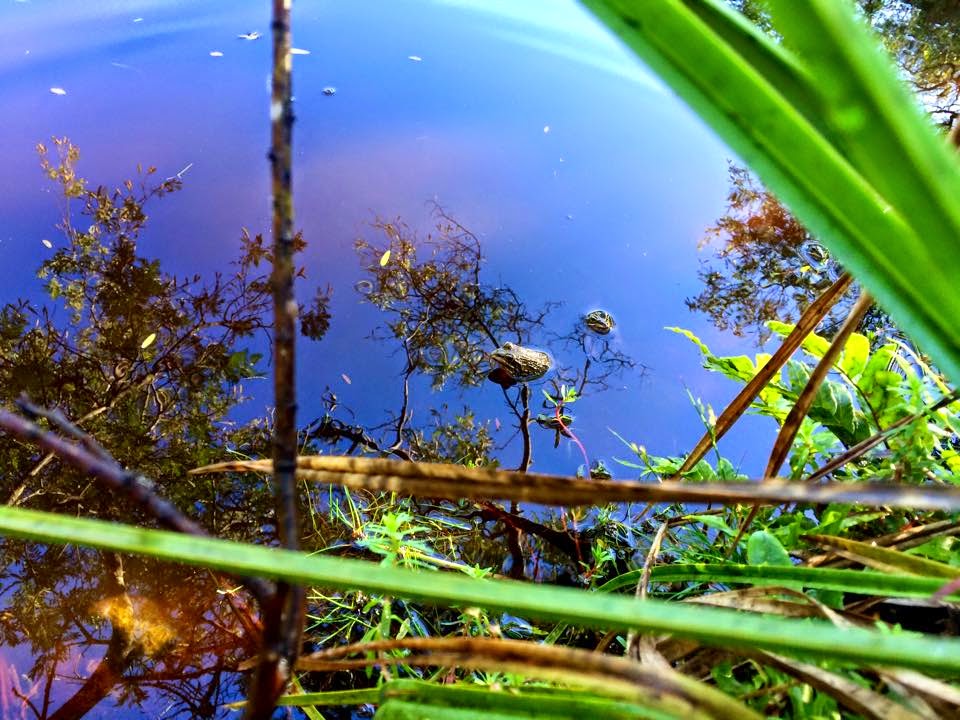 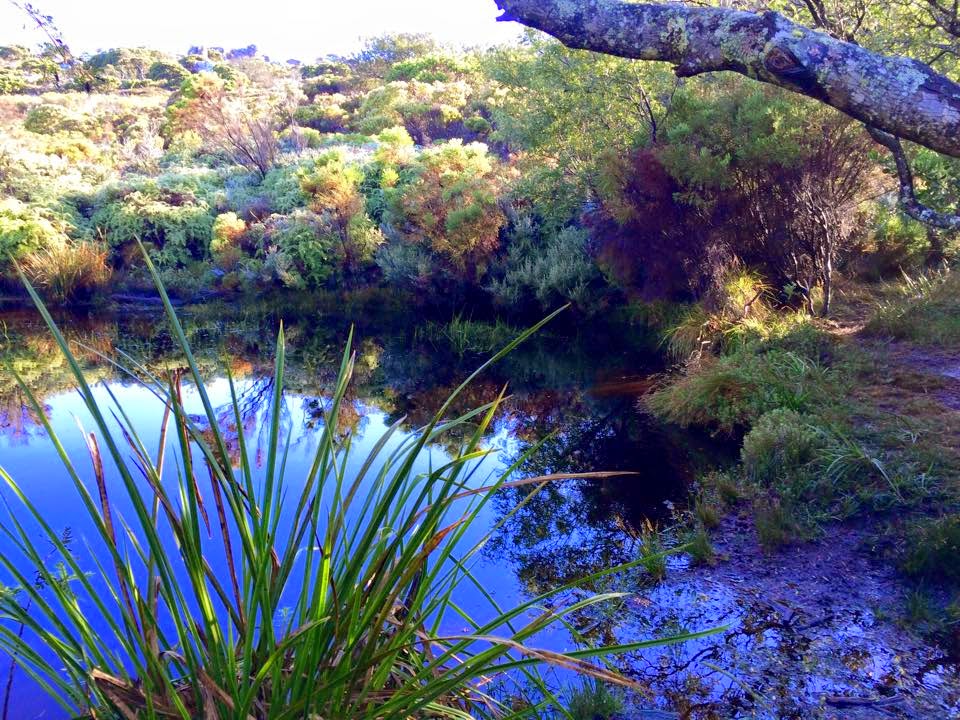 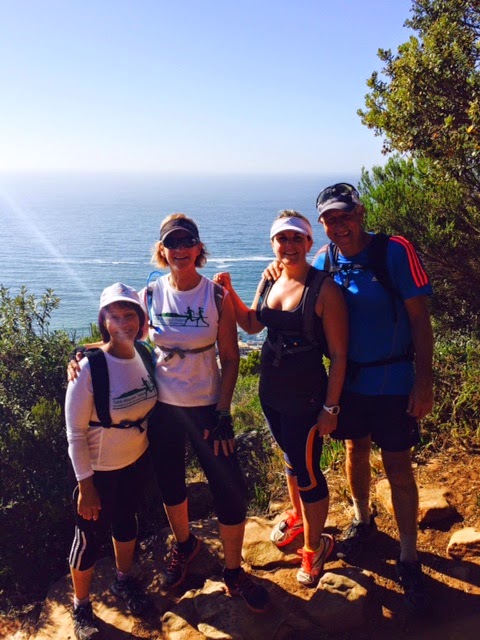 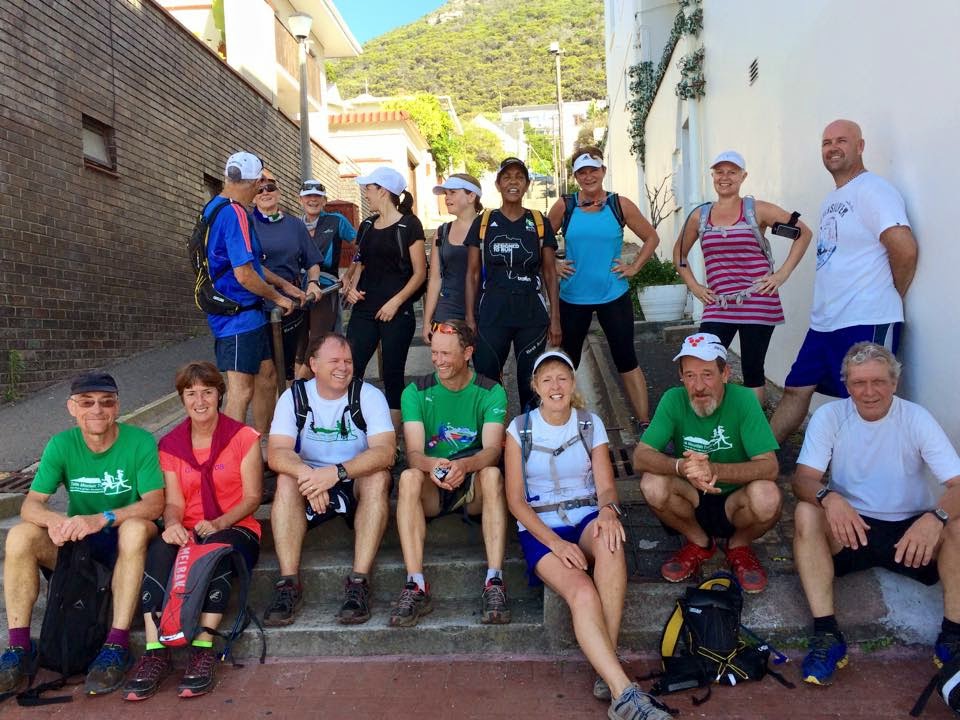 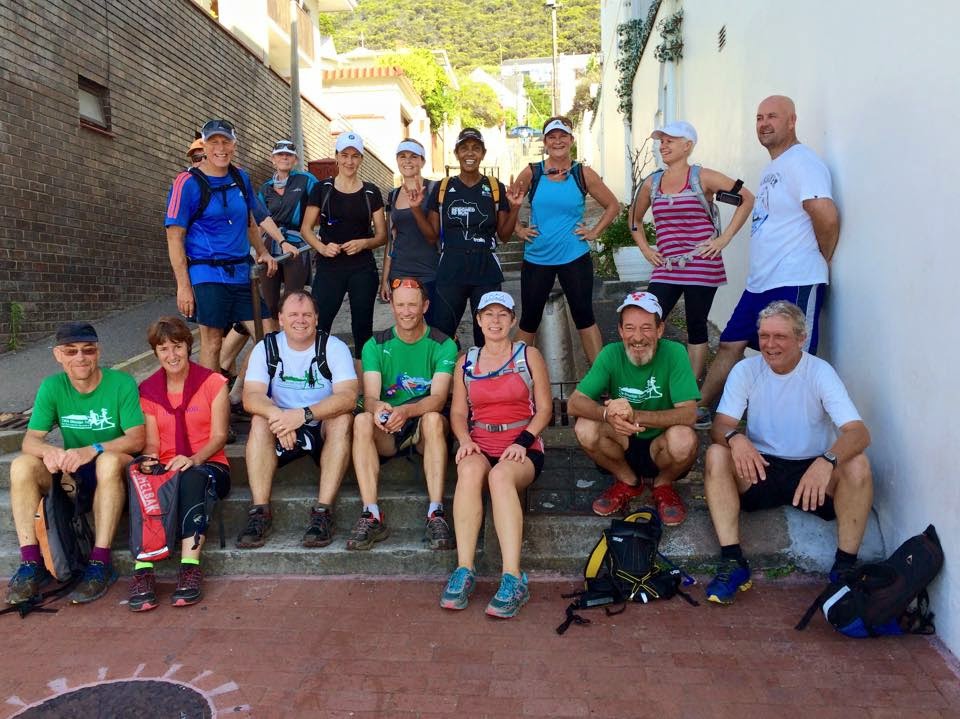 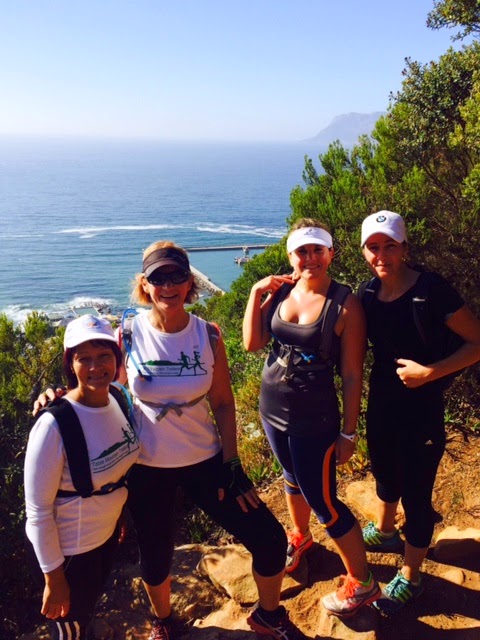 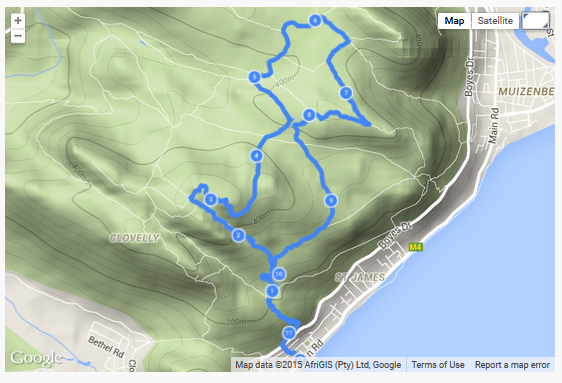 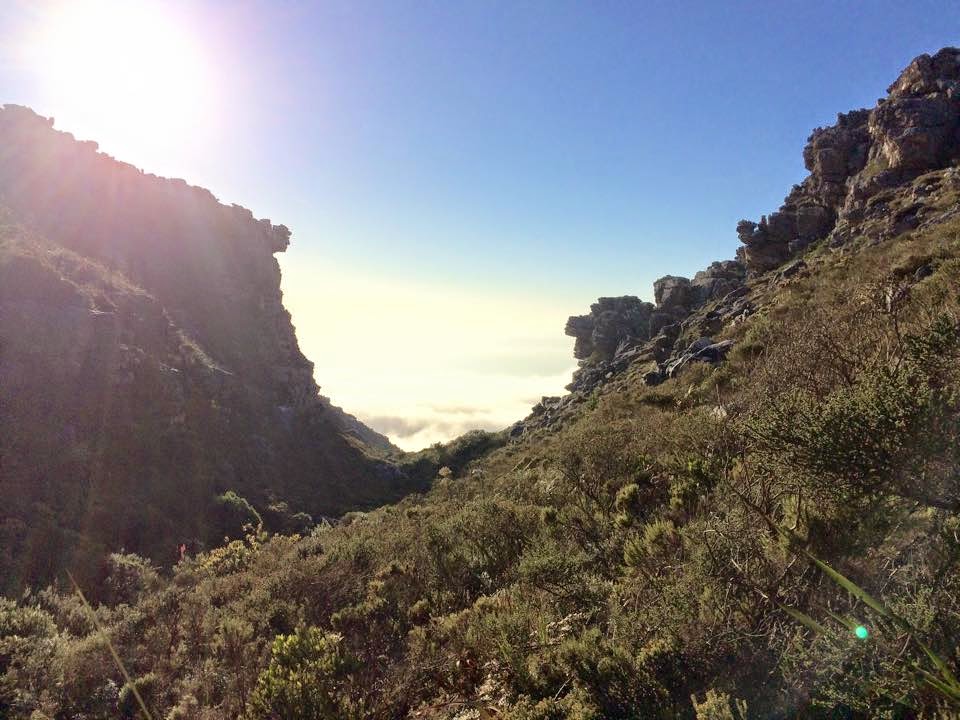 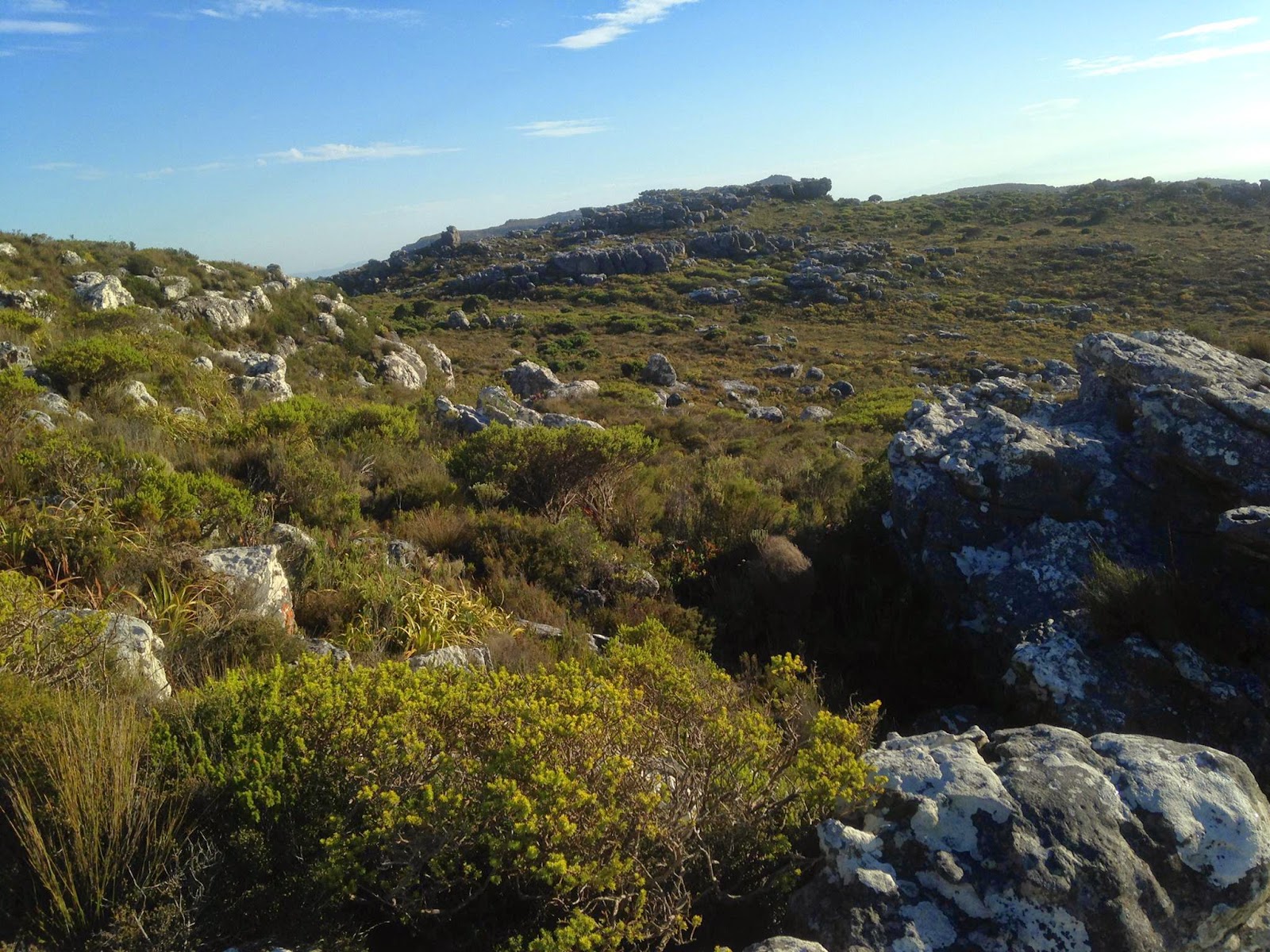 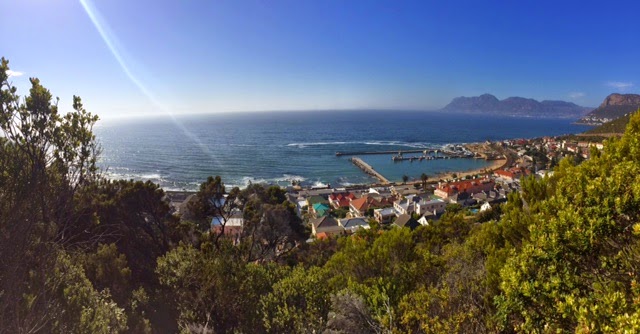 A large group of almost 40 smiling, happy faces arrived bright and early on a glorious Saturday morning for one of Gaeleen and Julian’s famous downhill start runs: Sunbird Centre and Silvermine S/E.

Three groups were quickly formed and the usual formal advice given by Gaeleen before setting off on our way. The first few kilometres were pleasantly shady and allowed us to warm up gently. The recovery group caught up with the main group at the first regroup position, which made us feel like real athletes. However, this meeting was the last time we breathed the dust from the heels of the Spartans. We did however, meet the walkers about a kilometre from the end of the run, and exchanged some pleasantries with them before leaving them to ramble down the last single track as we jogged down through the proteas.

At this time of year, the flora in Silvermine can be quite exciting. We spotted quite a few bright crassula (thanks to Liz for identifying them) amongst the otherwise muted greens and greys of the dry mountain growth.

Back at the cars, Garmins, Endomondos and Stravas were compared and combined and it was agreed that the main group did 15.05 km in a speedy 2h 25min; the recovery group did 11.8 km in a slightly slower 2h 15 min with the walk/run group hot on their heels with 11.4 km in 2h 20min!

Welcome to new member Bonny from JHB, who was only in CPT for a couple of days before joining up with us, and other new members whose names are still to be learned.

Congratulations to Liz Brash and Neil Gerbers who completed 75 sorties and have earned purple t-shirts.

Thirty-one bright-eyed, bushy-tailed runners full of good New Year intentions pitched up at Kloof Nek parking lot. We all slogged up the hundreds of steps to the contour path, with much muttering about this being the worst start to any of our runs (it is, but it is short and brutal and over quickly if you are fittish).  All three groups covered the same route from the Kloof Nek car park, up the steps, and along the contour path on the front face of Table Mountain.

The main group was smallish with about 11 of us, although that number constantly changed and was a bit tricky to keep track of.  Hein took off to the Blockhouse to meet his sister, who had overslept, and so he came back, found us, scooped up Julian and in a cloud of testosterone they were off with Hein managing to cover 20 kms in the time it took us to cover 14! (We did regroup a lot.)  Elite runner, Kevin Hurwitz, mumbling something about having just taken 2 months off, joined us until the Oppelskop path and is probably still out running. We managed to temporarily misplace 2 runners when we turned off to the Oppelskop path (note to run leader, when your last 4 runners are all wearing blue t-shirts don't just see a blue t-shirt and presume they are all together like a flock of birds).  Geoff caused consternation when he suddenly disappeared from view.  One minute he was behind Bels and in front of Elvera and the next minute ‘poof’ he was gone. Convinced he had fallen off the side of the mountain without anyone noticing, I was just about to call mountain rescue when he appeared from behind a bush after performing emergency ablutions.

Some achievements: Allison completed her 60th sortie, Sam [Brinkman] her 30th, Chantal her 25th and Elvera her 10th which promotes her to the quick check-in at the top of the page. 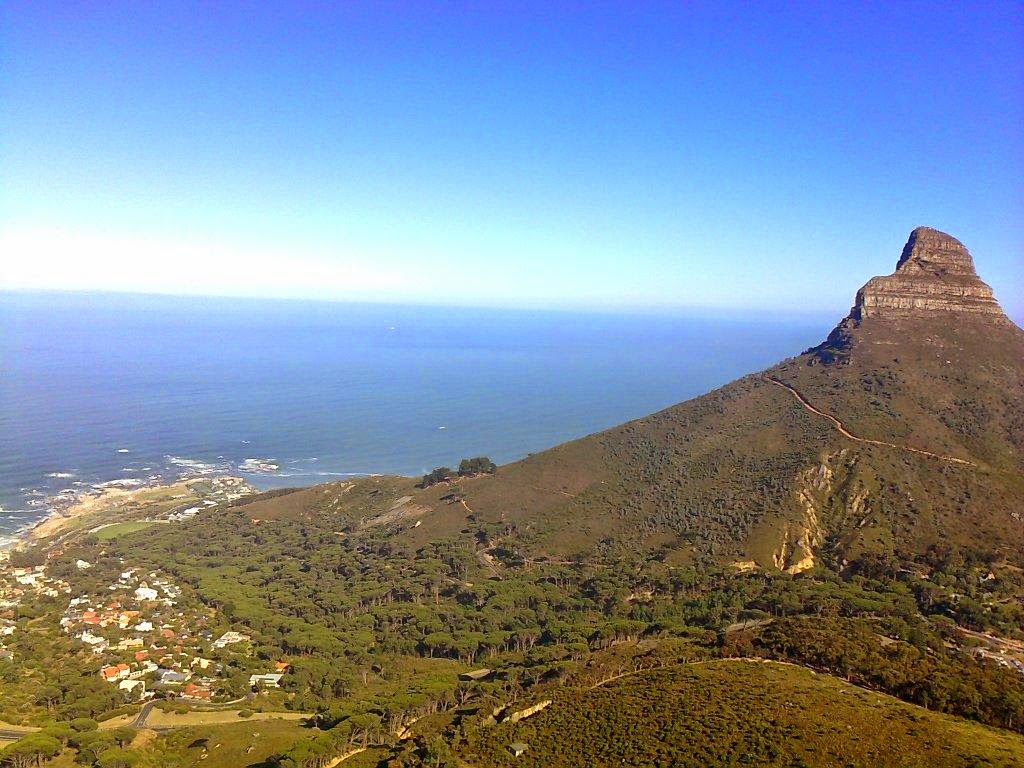 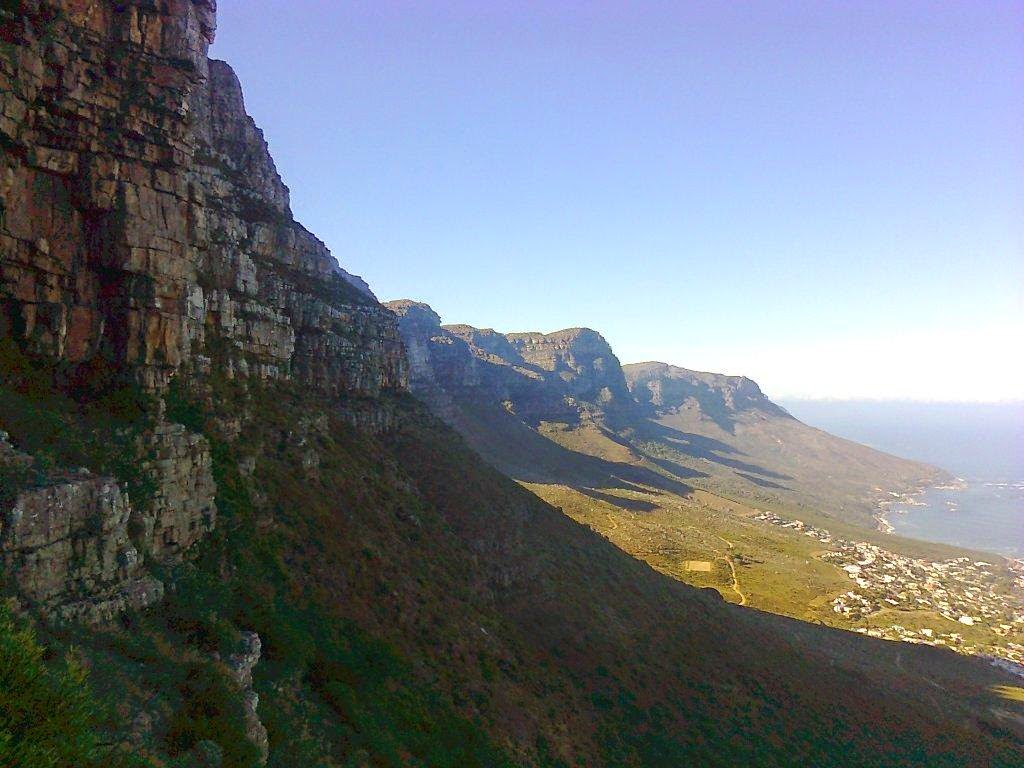 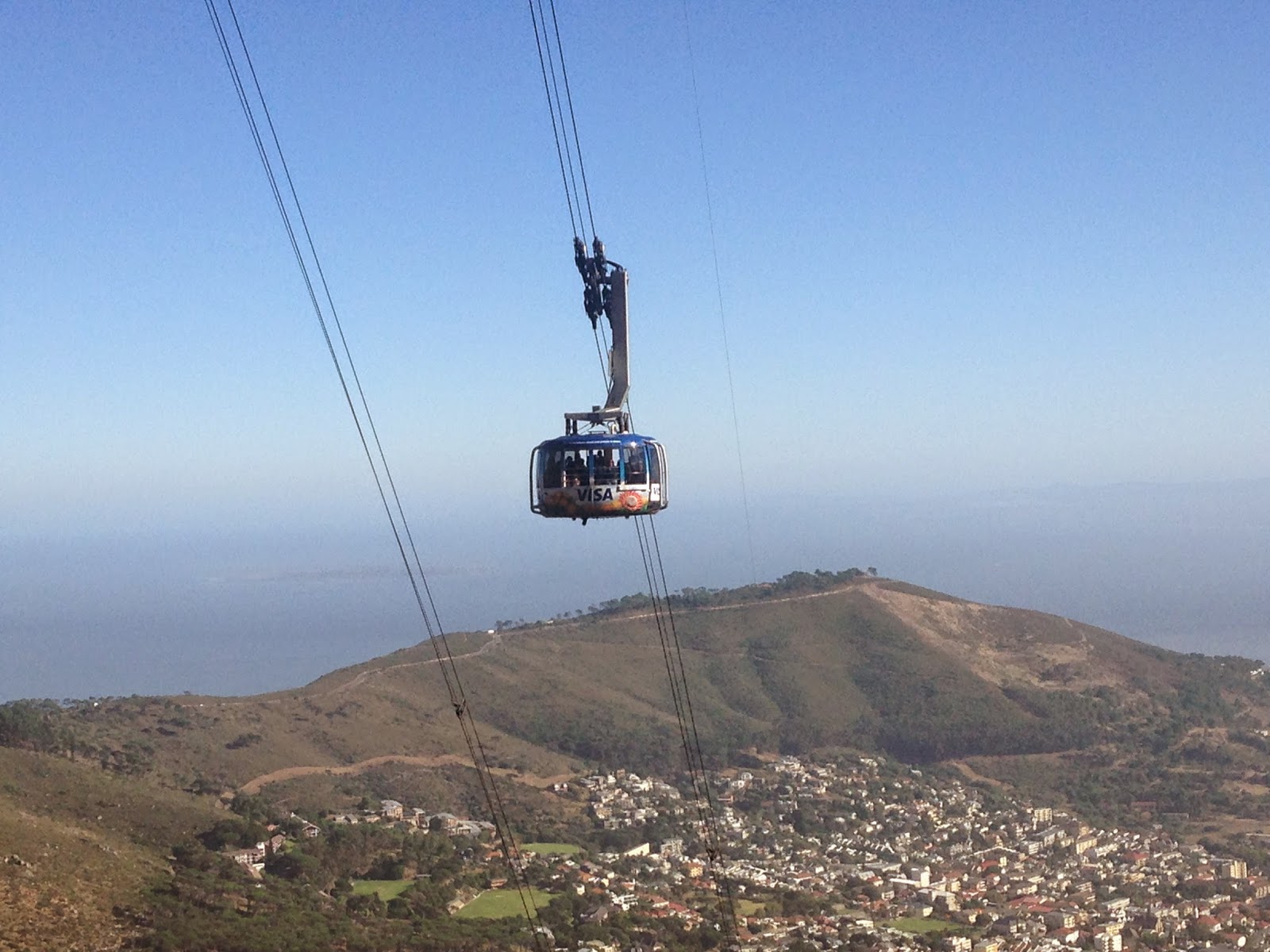 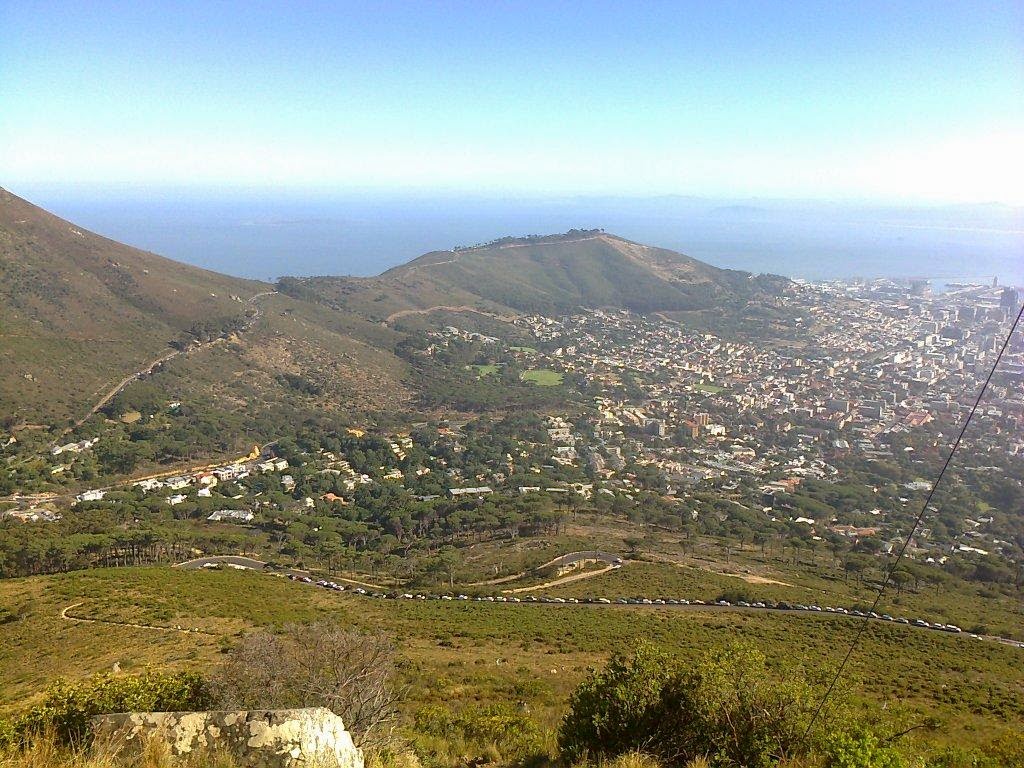