I was heartened to find that several others shared my optimism about the break in the weather this morning because 14 turned up including Sandy Ackland my fellow founder of Table Mountain Trailers who has not been running for over a year and Neil Garbers a regular who has been off running for several weeks with a severe chest infection.  Welcome back both of you. 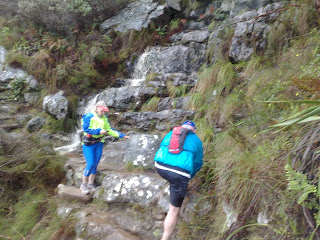 And a welcome to Leif Westvig a newbie.

Yes we had a good and dry run with several periods of sunshine!   The route was a variation of the popular run on the mountain above Cecilia Forest.

Gregg and Gae led the Main group and four others came with me in the Recovery group.  Unfortunately Fay had a walking group reduced to herself only.  Think the photos tell the story best

Congratulations to Neil Garbers who completed his 50th sortie this morning

Thought for the day

In this world we have trail runners who are stouthearted and take a chance that the weather will be OK and they are most often rewarded with a glorious, invigorating and inspiring run in the mountains.  Then we  have the more fainthearted who at the sound of an early morning raindrop  stay in bed.

Definitely one of our most scenic and beautiful runs.


After helping out at the Puffer table twenty one of us including three newbies made our way down to Buffelsbay for the start of our run.   It was good to welcome back Tissa and Dave both of whom sustained leg injuries and have been off trail running for some weeks.

Indifferent weather other than a passing spit & spot at almost exactly at 0800 as predicted by YR we had a good and enjoyable run.   In the process we were overtaken by the longer-faster group who started near the entrance gate and followed the clifftop path.

Congratulations to Leslie Street who completed his 25th sortie with us and in so doing is now eligible to wear the coveted TMT Red tee shirt. 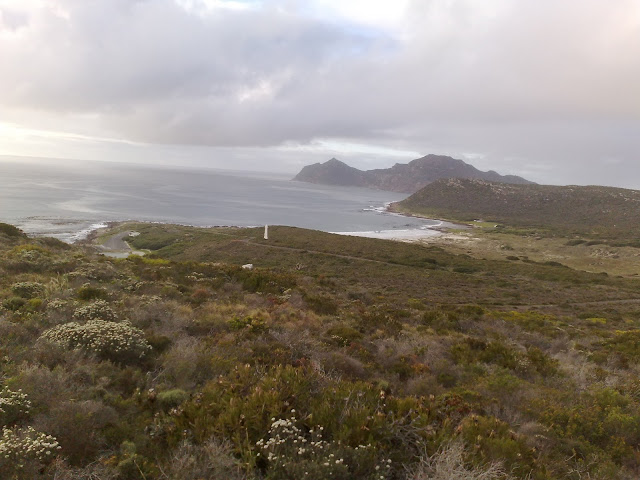 Forget Old Wagon Road this was a river run!

Only 9 decided to risk the weather, what was happening outside certainly did not correspond with the promising weather forecast!
Anyway just as we got out of the warm cozy cars the rain came down again, not too much of it just a gentle reminder.

As no one made the suggestion to can it all we set off  on the 3.5km long and muddy haul up to the crest of the hill overlooking the Silvermine river valley.

Couple of regroups along the way to let the  Recovery group catch up which was much appreciated, and which gave an opportunity for the inevitable group photo.


Whilst splashing along it came to mind that who ever planned this route [Gae, Gregg?] very carefully selected the trails which double up as rivers when it is raining.  Forget about trying to straddle the river and place your feet on either side, there was no dry side.   We needed snorkels.   And the dismay at finding a large and deep looking lake which had formed right across the one track.  Nothing but to wade through mushy muddy grass shin deep in water.
Then the rain came again but so what?  by now it was the glorious long downhill run back to the start.

Thanks to Gregg for standing in as the leader and for Gae for planning the route.

It was a glorious crisp winter's morning with the sun rising over a calm steel blue False Bay as 19 turned up for the run.  The twentieth runner who shall remain nameless but not blameless, failed to read the notice as well as the Friday reminder and so drove up to Constantianek.   From there it was a plaintive call to find out where we were and dismay to learn we were about 20kms away.   But being an enthusiastic trail runner a small black car was noted hurtling south and with smoke billowing from the exhausted engine it slid to a halt just as we were leaving.    N will not make that mistake again!

After about 3kms the Recovery Group were somewhat mystified to see the Main Group running in the opposite direction along a trail below them.   Seems The front runner at the time R, missed the turn and led them off towards Ocean View. Error was noted and  soon corrected which  led to a rare opportunity for a combined group photograph.

Anyway we all had a good run although some grazed legs were noted  at the end. 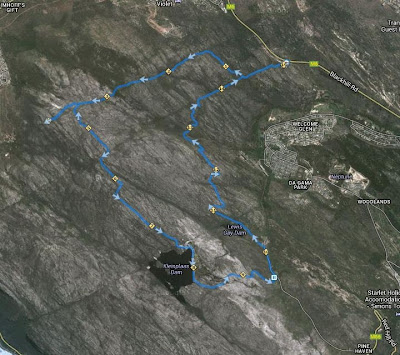