Report by Tim Bellairs, who was nominated (with Tamsyn) to lead the group this week as a penalty for chit-chatting on the Whatsapp Group. ;)

The morning started with a little squabble about who was going to lead the fast group in Tamsyn’s absence.  As Geoff was half asleep, he got nominated without his knowledge and the first he knew about it was when Peter announced it.  But Geoff is an old campaigner and handled the group with no problem at all.


The Medium Group comprised of 17 runners.  By the time we reached the top of the valley it was clear that there was a bit of an unmanageable gap between the front and the back.  Theo was sweeping at that point so I suggested we split the group and asked him if he wanted to take a slower group.  He looked me in horror. 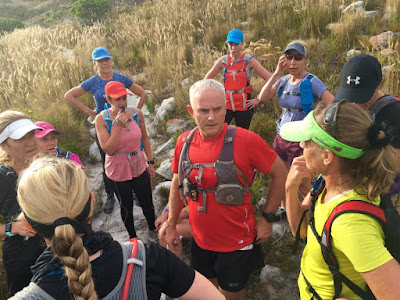 So he took a faster group and I took the slower group.  It was fantastic.  Okay they did moan a bit on the way up Dead Man’s Valley and I was told I was the worst re-grouper in the world.  I took the hint and stopped for a regroup.  However, the group didn’t stop and raced on passed me.  In fact they were going so strongly that by the time we got to the Amphitheatre I suggest we add on another loop.  Clearly this was an unpopular idea.  The looks said it all.  But during the regroup I was asked by a new runner who that very strict man was who gave the briefing at the start.  She was very concerned that Peter was going to look in her pack and find that she didn’t have a whistle.  Peter and I had a good laugh about that afterwards. 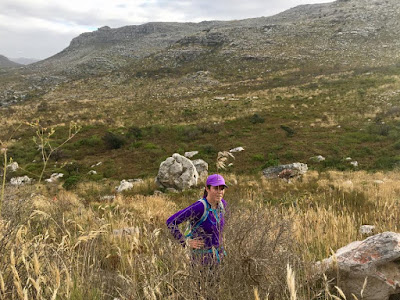 So we stuck to the plan and headed down the Crassula Path.  On the way down Crassula I was chatting to a very pleasant guy called Doug and was dispensing my usual “wise” trail running advice when he mentioned that he runs with Mark Preen and beats him in every race.  For those who don’t know, Mark is one of the best trail runners Cape Town has produced.  So embarrassing!  Needless to say my advice dried up quickly.  He was very kind about it. 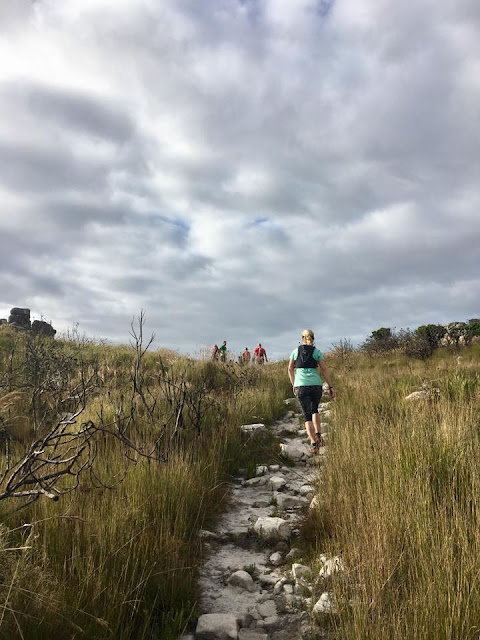 Once we got around to the top of the valley again the group had clearly sniffed the stable yard and were keen to gallop home.  So it was agreed that each would descend at their own pace and I would sweep to make sure no-one took wrong turns or got left behind.  Boom!  They were gone.  I couldn’t keep up with them.  They all skidded into the car park with me huffing and puffing behind.  We were followed, shortly thereafter by the fast group and then the faster medium group, both of whom had done an extra 2kms.  Only the fast group leader and one runner were absent.

Our Norwegian runner had pulled a calf muscle and was sensibly walking down, escorted by Gentleman Geoff.  She’ll be okay. 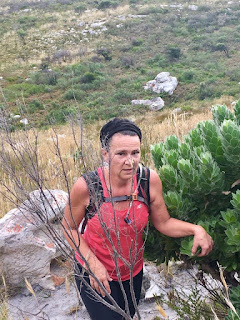 Geoff's choice of route saw us meeting at Newlands parking area (where the fire fighting helicopters park) and heading up and to the right towards the turnstile and the King's Blockhouse.

The Fast and Medium Groups headed up over the Saddle to Breakfast Rock and whizzed down Newlands Ravine, popping out at the wooden circular picnic table on the contour, then straight down through the tranquil forest, keeping the river to their right.

The Slow group went a little too far towards Town and did a few hilly kilometres on the slopes of the mountain above the quagga-field, but discovered a new short cut to the turnstile with views over the harbour and Table Bay before heading back on track to the boardwalks and the picnic table, and heading down in the welcome shade of the trees.

Photos by Liz and Lorraine

A good turn out today with 32 runners of and many of them new faces.
From Cecilia car park we followed the cycle track parallel to Rhodes Drive. The Main Group led by Katya Soggett sped off into the distance and we didn't see them again until after the turn around point at Skeleton Gorge. 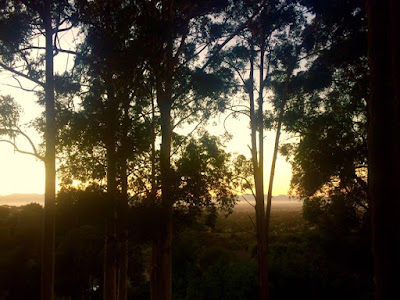 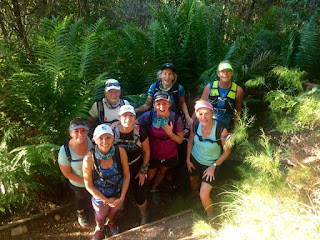 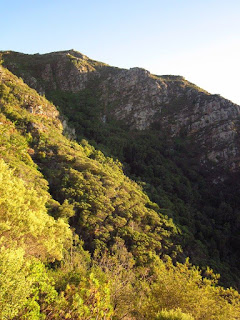 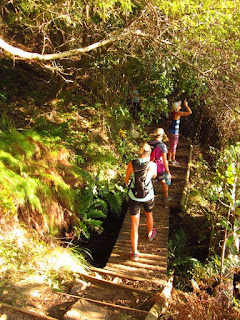 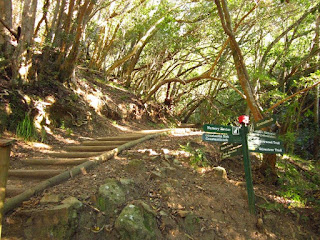 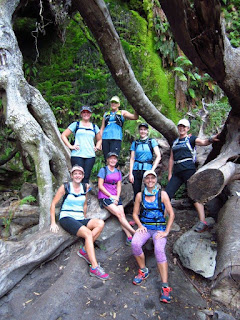 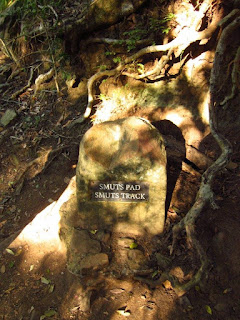 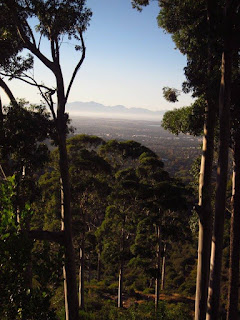 
This is one of my favourite routes – technical, hilly and with glorious views. Thirty-two pitched up to trudge up Kloof Corner and see the sunrise. The Fast group took off along the contour path and split up later with Tim, Hein, Gemma and Adele turning back sooner than the rest of the speedsters, who carried on past Oppelskop into Newlands and landed up doing a 17km run.

The Medium group went up to the Saddle and across to Oppelskop, lots of climbing and stopping for pictures. Instead of doubling back they took the downhill towards Tafelberg rd and reconnected with the lower contour path back to the start.

The Slow group missed the Platteklip turn off and landed up doing more of front face than they had planned, before turning down into Deer Park.

Thanks to Hein, Tamsyn, Geoff and Nora for leading groups and Liz and Lorraine for pictures.