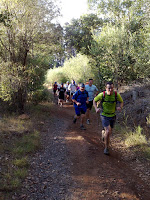 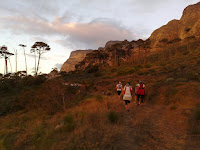 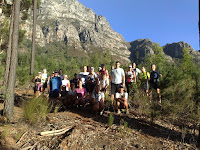 For this week we were joined by a few members of the short distance trail running group so we had 26 who started out. From the parking area we ran back through UCT to the actual start line in front of the “Jammie Steps”. Thereafter thanks to the acquired map of the revised route we were able to run the route with only minor errors of navigation. No incidents were noted and by all accounts those who have entered the race now have a very good idea of what lies ahead. For the rest of us it was a good run in an attractive area. 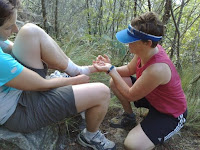 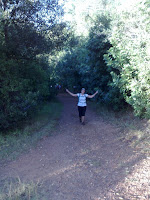 Congratulations to Veronica [left above] and Sam [right above] for having run their tenth sortie thereby joining our growing Decurion group.

And getting there Pieter [Carst] with 6 sorties, Elaine, Lanesse and Annalise with 5 each. 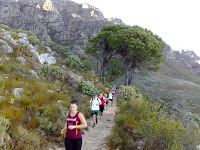 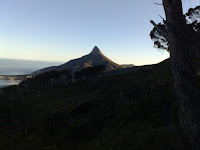 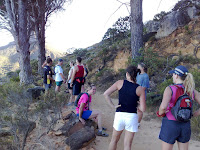 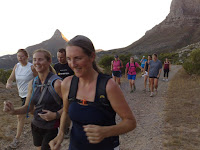 Sixteen mustered at the Kloof Nek parking area for the run/walk group in a warm muggy morning. The run along the pipe track to Corridor Ravine was relatively easy and uneventful and we were thankful that we were in the shade of the mountain as the morning was already warm and promising a very hot day ahead.

We turned back on reaching the steps down into Corridor ravine and retraced our steps to give us a run of 10.0 kms.

Congratulations to Felicity and Pat who achieved their tenth run with our group. 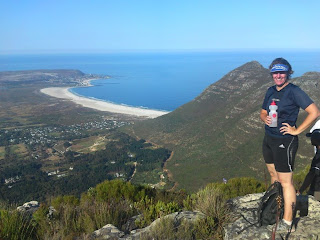 Despite the prospect of hot day ahead we had a good turnout of18 for our group walk/run which consisted of a good scramble up and along Steenberg Ridge to Elephant’s Eye lookout.  From there it was a long hot slog up the track to the Noordhoek lookout and its wonderful vista overlooking the Atlantic coastline.  Then a run down to the dam and without second thoughts a cooling and refreshing swim or dip depending on choice.  On the way back down the board walk some of us missed the turn off and only realised it after about a kay so amidst much grumbling turned back.
The full set of foto's can be viewed on Picasaweb.
Good luck and a Safe Ride to those of our group who are riding in the Argus on Sunday
Forthcoming Attractions
Saturday 12th March NO ORGANIZED TRAIL RUN
Our parent club ACSIS-VOB are hosting the Constantia Village 15 so some of us are marshaling, manning water tables or assisting in some way.  Others will be running.
Sunday 13 March we may do an informal  run in the starting from the Arboretum at 0730 If interested please e-mail Peter.
Saturday 19 March KLOOF NEK PIPE TRACK
This is a new route for our group
Saturday 26th March TWO OCEANS 10K TRAIL ROUTE
Having, I hope, learnt from the navigation errors from our first sortie over this route, then this time we should get it right!
Saturday 2nd April CONSTANTIA NEK
Will try a variation of our usual route
Saturday 9th April Still to be determined
Many of us are off to Sedgefield to run the Outeniqua half
Saturday 16th  April  SILVERMINE SOUTH EAST MULTI PEAK FIESTA
A regular and popular route around the peaks
EASTER WEEKEND 22/23  April TWO OCEANS Trail Runs, Half and Ultra Marathons
Need I say more?
Saturday 30th April  EAST FORT [] MOUNTAIN MEANDER
A return to one of our panoramic routes above Chapman’s
Posted by Sandra Ackland No comments: